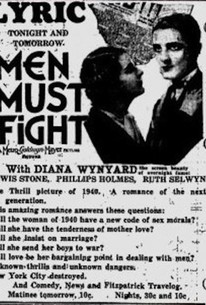 In this film, a remarried war widow's attempts to raise her son to be a pacifist are thwarted when a second world war (this film was made well before WWII) erupts. Up until then, her new husband supported his wife's crusade, but he becomes a strong supporter in the fight.

May Robson
as Maman Seward

Luis Alberni
as Soto
View All

Critic Reviews for Men Must Fight

Audience Reviews for Men Must Fight