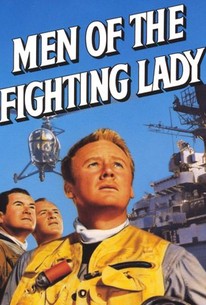 Leave it to MGM to turn the Korean War into a splashy, big-budget, all-star extravaganza. Men of the Fighting Lady is set on the US aircraft career of the same name. Van Johnson stars as Lt. Howard Thayer, while other MGM stalwarts in the cast include Walter Pidgeon, Kennan Wynn and Louis Calhern. The film's highlight is the famous fact-based scene wherein Lt. Thayer "talks in" blinded pilot Kenneth Schechter (Dewey Martin), assuring a safe landing for the incapacitated flyer. As a novelty, no concessions are made to the "love stuff" addicts in the audience: there is no contrived romantic subplot in the film, nor are there any women in the cast. Men of the Fighting Lady was based on two literary works: "The Case of the Blinded Pilot" by Cmdr. Harry A. Burns, and "The Forgotten Heroes of Korea" by James A. Michener (who is impersonated in the film by Louis Calhern).

Louis Calhern
as James A. Michener

Critic Reviews for Men of the Fighting Lady (Panther Squadron)

The tone in many ways reminded me of Top Gun, which would come out three decades later: Callow young pilots learn to rely on their fellow fighter jocks and act as a team.

Tepid factual Korean War drama about life aboard an American naval aircraft carrier stationed off Korea in the Sea of Japan.

There are no featured reviews for Men of the Fighting Lady (Panther Squadron) at this time.