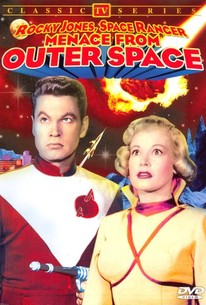 When an alien rocket descends to Earth, an expedition into space to find the origins of the strange device results in a clash between two worlds in this science fiction film that was compiled from three episodes of the Rocky Jones, Space Ranger television series. Upon studying the alien rocket and determining that it must have come from the planet Fornax, Professor Newton sends a team led by space ranger Rocky Jones to investigate. Arriving on Fornax to discover an alien race that has been brainwashed by the nefarious Professor Kardos into thinking that the population of Earth is about to invade, Rocky attempts to persuade the alien leader that this is not the case. His efforts are complicated when his arch enemy Griff arrives and attempts to use the alien's advanced technology against the population of Earth. Now Rocky and the aliens must join forces to overcome Griff if they hold out any hope of diffusing tensions between Earth and Fornax and saving the planet that Rocky calls home.

There are no critic reviews yet for Menace from Outer Space. Keep checking Rotten Tomatoes for updates!

In the mid-50s most episodes of the early TV sci-fi show Rocky Jones: Space Ranger" were assembled into a number of TV movies for re-broadcast. Unlike some of these recycled TV movies, Menace from Outer Space has less of a serial feel to it, and flows as if it were intended to be a feature-length film from the beginning. To summarize the Rocky Jones show - Jones (Richard Crane) is a space-ship captain who flies around the solar system with an improbably named sidekick "Winky" (played by ill-fated child prodigy Scotty Beckett) representing the United Worlds - an interplanetary political entity which has a very strong resemblance to Star Trek's federation. Also like Star Trek - the Rocky Jones series also consistently cast women in positions of considerable power and responsibility - a bold move for 1950s TV. Like later series from the Star Trek franchise, the show also employs pseudo-scientific black-box technologies and technobabble quite liberally in order to avoid plot holes and speed bumps on the highway of logic. In this story arc, Rocky and his extended family (a little kid named Bobby, prodigy scientist Veena, an elderly professor and, of course, the stalwart Winky) are drawn into high-stakes interplanetary political intrigue . One of Jupiter's moons, formerly believed to be uninhabitable, has launched a missile at the earth and forensic evidence concerning the missile suggests that the moon has a tremendous wealth of mineral resources never before suspected. Of course, Rocky is immediately dispatched to attempt to establish peaceful trade relations. The special effects are not bad for their time, but the average viewer today will probably find them laughable. The cinematography and directing are quite good for early TV, and the editing creates a fine pace for this family sci-fi space adventure. The script is predictably silly, but the characters are very consistently developed from show to show, and they are all quite likable. The acting is serviceable for its intent - family TV viewing. Recommended for those interested in Sci-Fi TV history and pulp sci-fi film addicts. Keep what this is intended to be in mind and keep your expectations low, and you just might have a good time with it! 2 1/2 Stars. 7-20-05

A girl in a short skirt and cape, Earth's top scientist, and a kid accompany the solar system's most renowned space ranger and his nearly competent assistant on a suicide mission to one of Jupiter's moons to find out why they are lobbing missiles at Earth. It's from "Rocky Jones," a failed TV series edited and repackaged as a movie. As science fiction it's terribly silly and illogical, but obviously aimed at kids and it's fairly watchable and nostalgic on that level.