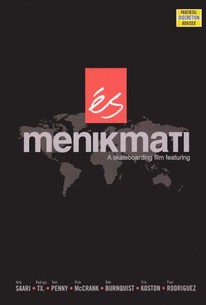 The eS Skateboard Team was assembled from some of the world's finest skating talent, and appropriately enough they've taken that talent around the globe, amazing skate fans with spectacular shows as far afield as England, Finland, Brazil, and Thailand. Menikmati is a documentary which takes a look at the seven skaters who make up the eS Team (Arto Saari, Rodrigo Teixiera, Tom Penny, Rick McCrank, Bob Burnquist, Eric Koston, and Paul Rodriguez) exploring their individual talents and backgrounds as well as how they've come together to work as a group.

There are no critic reviews yet for Menikmati. Keep checking Rotten Tomatoes for updates!

There are no featured reviews for Menikmati at this time.