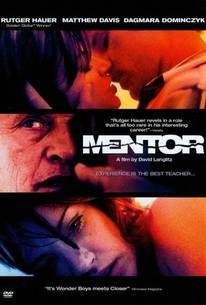 A young writer's friendship with a famous author turns sour when he falls for the wrong woman in this independent drama. Sanford Pollard (Rutger Hauer) is a once-famous and successful novelist whose career is in a bit of a slump. Pollard has used his still-impressive literary reputation to land a prestigious teaching position at a major university, where English student and aspiring author Carter Baines (Matthew Davis) is his student and assistant. While it doesn't take long for Baines to discover how petty and manipulative Pollard can be, he's also more than a bit awed by the great man, and feels privileged to be taken under his wing. Pollard has another favorite student, Julia (Dagmara Dominczyk), a beautiful coed who becomes his lover, but as the friendship between Pollard and Baines becomes closer, Julia finds herself increasingly attracted to Pollard's handsome young assistant. For a while, Pollard and Baines share Julia's affections, but when she decides she wants Baines more than Pollard, the older man becomes increasingly angry and vindictive against his charges. The first feature film from director David Langlitz, Mentor received its world premiere at the 2006 Tribeca Film Festival.

Carrie Yaeger
as Nurse
View All

There are no critic reviews yet for Mentor. Keep checking Rotten Tomatoes for updates!

There are no featured audience reviews yet. Click the link below to see what others say about Mentor!