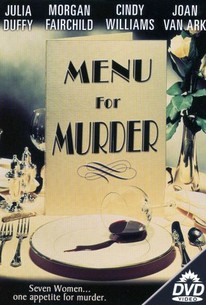 The made for TV Menu for Murder was first telecast December 4, 1990. An unpopular PTA leader is murdered with a poisoned croissant sandwich during a gala luncheon. Though practically every woman on the committee had expressed a desire to kill the victim, the principal suspect is housewife Julia Duffy. Detective Ed Marinaro conducts an intense investigation of Julia-much to the discomfort of her husband. Joan van Ark and Morgan Fairchild also star, the latter incrongrously cast as a PTA treasurer. Originally titled Murder at the PTA Luncheon, Menu for Murder was reportedly withheld from view until a few legal matters could be smoothed out with the Parent-Teacher's Association.

Critic Reviews for Menu for Murder

There are no critic reviews yet for Menu for Murder. Keep checking Rotten Tomatoes for updates!

There are no featured reviews for Menu for Murder at this time.