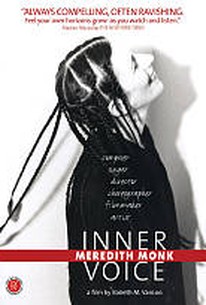 If an observer used one adjective to summarize Meredith Monk, "diverse" would just about cover it. A multi-hyphenate who divides her time between filmmaking, composing, singing, dancing, choreographing and a host of other skills, Monk attributes her breadth to over four decades of passionate Zen Buddhist beliefs that continue to deepen and enrich her focus. Drawn from a myriad of sources including film clips of Monk performing, interviews with Monk's collaborators, and revealing discussions with the lady herself, this documentary program from Holland both etches out a biographical portrait of the artist and establishes a sense of her need to live in and through self-expression. It also follows her creative process up through the period that produced her piece 'Songs of Ascension.' ~ Nathan Southern, Rovi

There are no critic reviews yet for Meredith Monk: Inner Voice. Keep checking Rotten Tomatoes for updates!

There are no featured reviews for Meredith Monk: Inner Voice at this time.