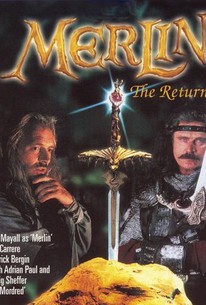 The greatest magician in the world isn't about to let a little thing like being over 1,500 years old stop him from saving England in this comic adventure. Miss Maxwell (Tia Carrere), an unscrupulous scientist from the United States, has arrived in England with a plan to use the manipulation of magnetic fields to bring evil sorcerer Mordred (Craig Sheffer) back from the dead and into the present day. Hoping to stop Maxwell's scheme before it's too late, the ancient magician Merlin (Rik Mayall) comes to the rescue; however, he's a bit too old to handle the job all by himself, and Merlin is forced to enlist the help of some friends from his salad days -- King Arthur (Patrick Bergin), Sir Lancelot (Adrian Paul), and Guinevere (Julie Hartley). Though set in rural England, Merlin: The Return was actually filmed in South Africa.

There are no featured reviews for Merlin:The Return at this time.