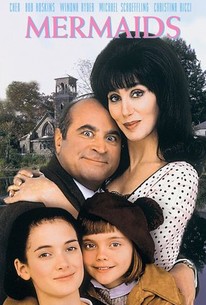 There's no point in recounting the many production problems and personal hostilities which plagued the filming of Mermaids: the end result is all that matters. Set in the 1960s, the film details the relationship between an unorthodox, unmarried vagabond mother (Cher), and her two daughters. The 15-year-old (Winona Ryder), continually embarrassed by her flamboyant mother, wants to be the world's greatest Catholic; the nine-year-old (Christina Ricci) would be satisfied with becoming the world's champion swimmer. Moving with her family to New England, the older daughter falls in love from afar with the groundskeeper (Michael Schoeffling) from a nearby convent, while Mom takes up with a lonely salesman (Bob Hoskins). Mermaids is perceptively adapted from the warmly comic novel by Patty Dann. ~ Hal Erickson, Rovi

Baxter Harris
as Boss in Massachusetts

Amy Gollnick
as Girl in Bathroom #1

Seacia Pavao
as Girl in Bathroom #2
View All

The delightful Ryder, billing notwithstanding, is really the star.

Miss Ryder is so good, in fact, that "Mermaids" might have dared to be a tougher, more satisfying movie than the stylish sitcom it is.

It's awash in mediocrity, waterlogged with innocuousness and redeemed only occasionally by sweet-faced Ryder.

I found a lot of it preposterous, but I enjoyed that quality. Why do we look at movies? To learn lessons and see life reflected back at us? Sometimes. But sometimes we simply sit there in the dark, stupefied by the spectacle.

Having made something of a specialty of woe-is-me, adolescent angst, Ryder finds a deeper level here, a level of comedy with something genuinely painful mixed in.

Every character is personable and amusingly written, with a persevering wittiness present even during sadder moments.

A bright, buoyant comedy about an unusual mother-daughter relationship.

A pleasant but dull coming of age story that doesn't quite swim.

When "Mermaids" is on the mark it's a riot - but often it bogs down with pointless set-pieces that seem to go nowhere and suffers from an ending that feels contrived and overly sentimental.

I enjoyed it. The energy drops somewhere around the middle, but picks up quickly. The story is well told and unique. Though Cher is spectacular in the main role, it really is Winona Ryder who makes the film worth watching. She is, as usual, captivating, and makes an excellent and amiable narrator. She is perfectly cast and steals the show.

Cute movie. I like Christina and Winona. Cher gets on my nerves a bit, but I think her character is meant to be annoying. Coming of age tale set in the 60's.

Mermaids is the story of a family of three ladies, a mother and her two daughters. Winona Ryder plays the eldest daughter who actually looks down her mother. Ryder dreams of becoming a nun so that she can live a pure and honest life. Cher is the mother, who constantly moves her family around whenever she fails at a relationship. Ryder is tested by a young man that she starts to have feelings for while Cher has difficulty adjusting to a serious relationship with Bob Hoskins. It's a fine film on all accounts as both a comedy and a romantic drama. The rift between Cher and Ryder is an easy one to understand and they both play it brilliantly. You always get the feeling that they are tired of one another, but the love is always present. Hoskins is a fantastic and surprising romantic lead. He gives off a strong dominant force, but also comes across as fragile. It's his strength that gradually repairs this family. Christina Ricci stars as the youngest daughter and it's no surprise she became a star. She manages to do young and cute without being annoying. The soundtrack helps to capture the time period very well. The pacing is often off and it feels like an edited down novel, but when it's hitting those high notes in terms of comedy or drama it is a great watch.

I read the Wikipedia synopsis before I started watching this film and I thought the Winona-Joe romance was going to be super uncomfortable (I mean HELLO, you are pushing 30 and you are taking the virginity of a 15-year-old girl?!?!? Pull it together man), but it kinda wasn't. I think it is because Winona is super precocious and odd. Anyway. The family of Cher-Winona-Christina Ricci made a lot of sense, and I think one's enjoyment of the movie rests in the believability of the strength and love of the the family bond. I personally thought it was great.