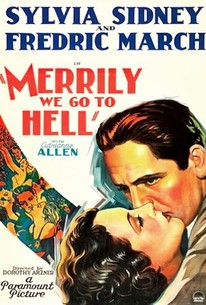 Merrily We Go to Hell Photos

Frederich March plays nere-do-well Jerry Corbett, who finally meets and marries the right girl, Joan Prentiss, played by Sylvia Sydney. Unfortunately their wedded bliss is interrupted when Jerry's play becomes a hit and he hooks up with the wrong woman from his past. Joan decides that turn-about is fair play and she picks Cary Grant to escort her around to various parties around New York. Eventually Jerry quits drinking and sends his girlfriend packing, just in time for Joan to take him back.

Tom Ricketts
as Guest at Wedding

Critic Reviews for Merrily We Go to Hell

A curious but highly entertaining hybrid.

Arzner perches the blithe whirl of social graces and casual deceit, public norms and private anguish, on a delicate edge of heartbreak...

"Merrily" packs an improbable number of narrative developments and tonal swings in a zippy running time.

Arzner had a gift for making female actors stars.

not a romantic comedy, although it is often labeled as such, perhaps because it is focused on a marriage and was directed by the only female director to work consistently during Hollywood's classical studio era

March and Sydney are well-balanced in this drama which is years ahead of its time.

Grapples with themes of alcoholism and infidelity in ways that are surprisingly frank for the time, even in pre-code era Hollywood.

Can you love an alcoholic who's tangling with this insidious disease? Typically substantial extras on this well-worth-checking-out blu-ray disc from The Criterion Collection.

Clearly a product of the pre-Code era.

As a piece of art, Merrily being watched and discussed is valuable to better understand the filmmaking industry as it exists today.

Sold as a comedy, the film is anything but; Arzner views café society as a snake pit, in which people use and discard each other without a backward glance.

Audience Reviews for Merrily We Go to Hell

Clever dialogue, fantastic acting, and several great scenes made this film a delight for me, but be forewarned, its main character may have you saying 'grrr', and reduce your enjoyment. Frederic March plays a newspaper reporter / playwright who has a drinking problem, and it's while he's drunk at a party that he meets a charming young lady, played by Sylvia Sidney. The two hit it off and despite the concerns of her rich father (George Irving), get married. Things get complicated when his ex-lover (Adrianne Allen) re-surfaces and he struggles to control his problem. It's a very strong cast all around, and Sidney in particular turns in a great performance. She ranges from a sweet, naïve, and trusting soul, loving unconditionally, to hurt and confused, to woman whose solution is to give her husband a taste of his own medicine, in a rather shocking development. The scene with her partying with her own young lover (Cary Grant no less) and his friends and quipping "Gentlemen, I give you the holy state of matrimony, modern style: single lives, twin beds and triple bromides in the morning" is sad, empowering, and a little thrilling all at the same time. As they're in a bar that's practically a den of iniquity, it's all clearly pre-code, but there is an intelligence and honesty in this scene, and throughout the movie. March is also strong as this affable but flawed man, and in early scenes we smile at his partying, at one point yelling "Is there a baritone in the house?" until he finds a barman to fill out a quartet with his friends so that they can break out in song. The warning signs are there in his tardiness and even at his wedding, as he and his best man (Skeets Gallagher) fumble for the ring, which he's forgotten. That scene is one of several that are well directed by Dorothy Arzner, as she cuts to guests making observations and the facial reactions of March and Sidney as they say their vows. There is a lot of partying and revelry which may put some viewers off, but I found that allowed for some fantastic moments. In one, March asks Sidney to shut the door and hold him back from going to the other woman, and in a strong way she opens it wide and says "I'm no jailer - get out!" In another, as March and Allen 'play-act' a passionate kiss to the merriment of others right in front of her, we feel the shock and humiliation amplified by her brilliant facial reaction. The title is clearly meant to titillate, but the film has real substance beneath. It's wild, but also realistic, though I didn't care too much for the ending. We see what destructive behavior leads to, and in that I suppose there is a message, but it's delivered without heavy-handed moralizing. The plot is a tad melodramatic, but it's daring and unique in the areas it explores. Well worth checking out, if you're in the mood for pre-code.

Sylvia is wonderful here all soulful eyes and wounded dignity with an inner core of strength however March is a contemptable heel and the script isn't really anything special. A very young Cary Grant is in and out of this in about two minutes.

"marrily we go to hell" is a pre-code celebration of reckless brass toward hedonism as well as some possible suggestive content of marital promiscuity. sylvia sidney is still typecasted as the virtuous good girl who sticks to her beau even he may be a drunk wimp who cannot just make up his mind whom he truly loves, incurred with a very shakespearan issue "to be or not to be", absolute melodrama. besides that, you could take a peep at young gay cary grant who seductively tosses his champagne while leering the dame next to him. so sidney is enormously rich but well-behaved nice dame who's got attracted to a handsome alcoholic who has a strange sort of quibing cuteness to charm the lady of silks into the slave of love. so she's determined to love him and wed him even he's abscent in their engagement party, forgot to bring along his matrimony ring in the ceremony and mostly he still possesses a self-contradictory crush to a broadway prima donna of blonde hair. gorgeous sidney of brunette hair still tolerates that since her beau always says "you're the swellest dame i've ever met" without any assured announcement of L. O. V. E. later she descends along with him while he's hanging over the blonde on the other hand, so merrily they go to hell in booze and decadence despite our swell dame still looks helplessly chaste in decay. would good sydney win the man she deliriously loves? the best pleasure of pre-code movies is its indulgence of thorough melodrama without the moralistic hindrance for better light of doctrine. somehow sylvia sydney, whose mostly reputed work remained today is still hitchcock's "sabotage", shimmers in her adorable ingenune naivete whether it's pre-code or post-code, unlike norma sheer who conducts like man-hunting tramp before code but stingy mama after code. but i do harbor a private wish to see sylvia sydney act sluttish just like loretta young in pre-code "midnight mary" to gratify male audience's voyeuristic covet, but it ain't goody sydney. (lol.)

Merrily We Go to Hell Quotes