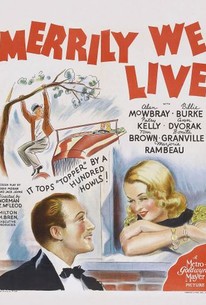 Merrily We Live is a blatant imitation of My Man Godfrey, courtesy of producer Hal Roach. This time Brian Aherne is the gentleman vagabond whom flighty society matron Billie Burke hires as a chauffeur. Aherne's down-to-earth attitude jars against the high-toned phoniness of Burke's wealthy household, but soon the butler has "humanized" everyone around him. He also falls in love with Burke's daughter Constance Bennett, the snootiest member of the family. While at least one prominent film historian has applauded Merrily We Live for avoiding the muddled political subtext of My Man Godfrey, critics in 1938 were less politely inclined, blasting Merrily for being so unabashed a carbon copy. Audiences, on the other hand, loved the film, and Merrily We Live was a success.

Alan Mowbray
as Grosvenor, the Butler

Patsy Kelly
as Rosa, the Cook

Marjorie "Babe" Kane
as Rose, the Maid
View All

Critic Reviews for Merrily We Live

[Merrily We Live relies] neither on wit of dialogue nor on situation, but on the simple assumption that if everybody behaves in the manner of escaped lunatics not only the keeper but also those outside the asylum will be amused.

It's all in the acting and directing. Director Norman Z. McLeod has the knack of building up gags until he has three or four racing each other to the big laugh.

Merrily We Live is completely hay-wired for comedy and should make everybody happy, if slightly unhinged, for an hour and a half.

Audience Reviews for Merrily We Live

Silly piece of fluff but as play by experts it's quite enjoyable.

This movie is silly and has some good comedy, but it's not that good.