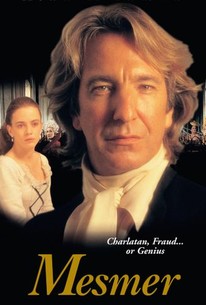 The subject of this loose biography will be truly mesmerizing for those interested in hypnosis, harmonics and other arcane sciences. It tells the story of Mesmer, the 18th century radical physician who used hypnosis and harmonics to heal is patients in a time when blood-letting was considered the only acceptable cure-all. That Mesmer's controversial techniques were especially successful on "hopeless" cases was a great thorn in the side of Viennese doctors who equated Mesmer's methods with devil worship. Mesmer was essentially a good and humane man, but he was not perfect as evidenced by his affair with patient Maria Theresa. Maria Theresa was a blind performer with a tendency for seizures. After he helps her at a concert by laying his hands upon her and willing her to come out of a seizure, the two begin an affair. Mesmer is married though, and when liaison is made public he is banished to Paris where he is embraced by the French court.

There are no critic reviews yet for Mesmer. Keep checking Rotten Tomatoes for updates!

The only reason to watch this is to listen to the sound of Rickman's voice, and watch him be sensual. The rest of it is boring and stupid. Also if you're going to watch it, turn the volume up a lot, because otherwise you wont hear a thing. Everyone is so annoying in this movie you just want to get a time machine and smack whoever was a real person. (Not sure if these were all real people in Mesmer's life or if they were created for the film.) Overall, this isn't a good movie although it is made well and based on a true story.