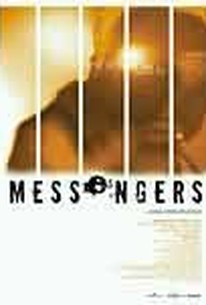 Television personality and model Naoko Iijima, along with Tsuyoshi Kusunagi from the popular music group SMAP, star in this wacky comedy about love and Lycra shorts. Naomi (Iijima), a champagne-sipping highroller on the run from bankruptcy and a corrupt boyfriend, hits a bike messenger (Hiroyuki Yabe) with her Alfa Romeo. Wracked with guilt, she reluctantly joins the low rent company co-owned by Suzuki (Kusunagi) to fill in for the injured courier. After an initially clumsy start, she decides to stay with the company and to get back at her boyfriend (who works for a rival firm) at the same time by making Suzuki's business the best darned bicycle messenger service in Tokyo. ~ Jonathan Crow, Rovi

There are no critic reviews yet for Messengers. Keep checking Rotten Tomatoes for updates!

There are no featured reviews for Messengers at this time.