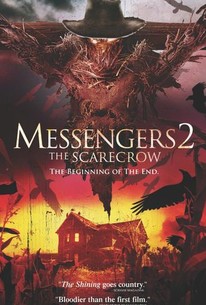 In this prequel to the Pang Brothers' terrifying English-language debut, the eerie backstory of farmer John Rollins plays out in all its bone-chilling glory. Doing what he believes must be done in order to save his family and livelihood, John places an odd scarecrow among his crops and promptly reaps the benefits. The thing is, his luck probably won't last for long. Produced by the celebrated Ghosthouse Pictures (30 Days of Night, Drag Me To Hell) and penned by Todd Farmer (the screenwriter behind the 2009 remake of My Bloody Valentine), this is one hayride best not taken alone.

Critic Reviews for Messengers 2: The Scarecrow

...suffers from many of the problems that plagued its predecessor...

For better and for worse, Messengers 2: The Scarecrow is - dare I say it - corny.

Audience Reviews for Messengers 2: The Scarecrow

The Messengers may not have been the best horror film, but it definitely wasn't the worst. I frankly enjoyed the first film, and thought it was a fine ghost story. But this direct to DVD Prequel is awful.The film is poorly conceived with a bad plot and bad acting. Like with every other straight to DVD title, The Messengers 2 looks cheaply made. I felt that the film lacked anything that would make a good horror film. The absence of chilling horror makes this an awful film. The Messengers was a good film, but this prequel is simply poorly made. The film has no real connection to The Messengers aside from the films score. I felt bored watching this and it took me everything to finish watching it. I was really hoping to like it, unfortunately, this straight to DVD title continues the tradition of bad straight to DVD titles If you're looking to watch the film, be warned.that it has nothing to do with The Messengers. This prequel doesn't explain anything, and decides to go somewhere that has nothing to do with The Messengers. In other words this prequel doesn't make sense, and is only related to The Messengers in name alone. The film is poorly directed, with sloppy writing and acting. If you're looking for a good horror flick, you won't find it here. Messengers 2: The Scarecrow is an awful attempt at cashing on the success of the original. Though The Messengers wasn't a great horror flick, it was still good fgor what it was. But this prequel is simply awful. Avoid it.

"The Shining goes country." SCREEM MAGAZINE Quite possibly the most accurate blurb ever. Supposely a prequel but completely goes against what The Messengers explains happens to the Rollins family. Instead this more than likely was an unused script Sony owned and since it involved a barn and a farmer they adapted it as a 'Messengers' film. Needless to say, it sucked. A slow, boring mess that never goes anywhere, borrows heavily from the aforementioned Shining and doesn't satisfy on any level. Well except a nicely gratuitous bare breasted scene. But other than that--zipola.