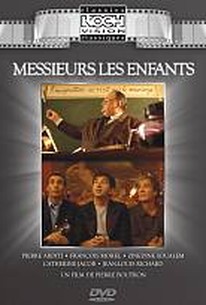 This French family fantasy follows in the footsteps of the fine and funny Big (1988). Solemn French schoolteacher Albert Crastaing (Jean-Louis Richard) punishes a trio of 12-year-olds by having them write a Kafkaesque essay with a body-switching premise, cueing the film's storyline of kids transformed into their parents. Nouredine is a French-born Arab whose father (Zinedine Soualem) is an artist forced to drive a cab. Catholic Igor's father (François Morel) died from AIDS after a blood transfusion. Joseph is a Jew whose father (Pierre Arditi) is a cranky and irritable tailor. The trio encounters a prostitute, Yolande (Catherine Jacob). Elsewhere, the parents inhabit bodies of their children and experience problems kids face daily. ~ Bhob Stewart, Rovi

There are no critic reviews yet for Messieurs les Enfants. Keep checking Rotten Tomatoes for updates!

There are no featured reviews for Messieurs les Enfants at this time.