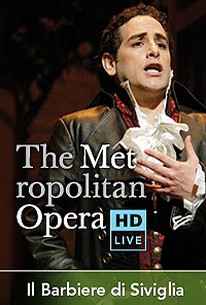 Fathom and The Metropolitan Opera present an encore presentation of Rossini's "Il Barbiere di Siviglia" (The Barber of Seville) in select movie theatres nationwide on Wednesday, July 29, 2009 at 7 p.m. in all time zones. One of the most beloved operatic comedies of all time, "The Barber of Seville" is presented in a production by Tony Award-winning director Bartlett Sher. An instant audience favorite at its 2006 Metropolitan Opera premiere, it was first seen on the big screen in March 2007 as part of the Met's Live in HD series. Superstar tenor Juan Diego Flórez as Count Almaviva is joined by American mezzo-soprano Joyce DiDonato as Rosina and Peter Mattei in the title role of the swaggering barber. The production will be preformed in Italian and subtitled in English. This program is not rated, but should be treated as G.

There are no critic reviews yet for MET Summer Encore: Il Barbiere di Siviglia. Keep checking Rotten Tomatoes for updates!

There are no featured reviews for MET Summer Encore: Il Barbiere di Siviglia at this time.