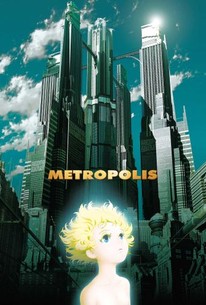 Playing like a candy-colored hybrid of Fritz Lang's film of the same name and Ridley Scott's Blade Runner, Osamu Tezuka's Metropolis borrows its plot liberally from numerous legendary sci-fi sources (despite the fact that the original manga was released in 1945, certain cinematic aspects can't help but appearing overly familiar), all the while dazzling viewers on the same cutting-edge visual level as such anime classics as Akira and Ghost in the Shell. The common anime practice of combining amazingly rendered backdrops and more traditionally hand-drawn characters continues here, though with such nuances as beautifully flowing hair and soulfully expressive faces, it becomes obvious that painstaking detail was paid to making the characters both visually and emotionally involving. However, as expressive as some of the central characters may be, it's the elaborate tri-level industrial labyrinth that encompasses the world of Metropolis that forms the film's central character, and it is a kalidescopic animated marvel to behold. Director Rintaro's beautifully composed visual design is so awe-inspiringly colorful and complex that, from the opening frames, the viewer is fully absorbed in the environment, with plot and characterization almost coming as an afterthought. And that is precisely where the film's ultimately forgivable main weakness lies. In between scenes of wide-eyed, jaw-dropping visuals, the story of human and android tension set against the backdrop of a futuristic city borrows from so many sources that it borders on cliché. Thankfully, writer Tezuka's characters are given a depth and sense of purpose that, while not altogether unconvincing or original, consistently connect with the viewer's sense of recognition and sympathy. Viewers will no doubt attest that Metropolis works almost flawlessly on a purely visual and asthetic level within the opening frames of the film. Thankfully, Tezuka's storytelling skills compliment that on a level which, while not entirely new or original, is at the very least genuinely sincere and thoughtful.

Scott Weinger
as Atlas
View All

we see the director's towering world of tomorrow being erected on the foundations of yesterday's cultural influence... a dizzying postmodern edifice, more impressive for its shimmering Steampunk architecture than for the dramas accommodated within

A fairly standard genre exercise, packed with light, detail, color, noise, and motion that add up to relatively little.

Tale of the struggle for personal freedom in a futuristic, tyrannical society is light on action by contempo standards, and pic's look is uninteresting, apart from occasionally bizarre backgrounds.

One of the most beautiful animated films ever produced.

The storyline is semi-snoozy but the visuals are tremendous.

A thoroughly engaging and satisfying tribute to the noble history of its genre and its form.

Rintaro directs an intricate anime, which uses the plethora of its main characters to present a number of sociopolitical allegories and metaphors.

Essentially, think of this as Fritz Lang for beginners - which is in no way a bad thing.

A spectacular if tonally incongruous reworking of Fritz Lang's 1927 original.

The storyline and lip-syncing aren't as amazing as the CGI backgrounds and traditional animation blending. But Metropolis is still an enjoyable and above all emotional film for big anime fans and audiences with an open mind for beautiful yet depressing cartoons.

One form of story telling that has, is, and always will be a test of true story telling talent will be animation. When one looks at it, animation will always be a less expensive, more breath-taking approach to films then any live action film can be. One of the best examples will have to come from Japan, their animation style known as anime. Already popular in the States, anime gives people a beyond detailed view into other worlds, creatures, and imaginations behind the people that created them that we can not help but be amazed at. Now, take anime and mix in elements from Fritz Lang's METROPOLIS, Ridley Scott's BLADE RUNNER, and Steven Spielberg's A.I. ARTIFICIAL INTELLIGENCE and what you get is a beautiful film with a plot that, while complex, is nothing that we have not already know. At the helm of directing is the ever wonderful Rintaro. Known for Astro Boy and Kimba The White Lion, Rintaro takes the story and tries to make it move to a certain pace and style. Style, he has that down. Pace, not so much. There are numerous times when the pacing is slow and you would wish it would hurry up. While this is something of a down fall, you have all of that beautiful animation that keeps your eyes glued to all of the 150,000 stills that are in the film and you tend to forget about the pacing. Due to this being a film that was drawn, I am going to have to replace acting with voice acting for this film. In case none of you know, voice acting is when an actor only submits there voice for the characters. In a way, this is more troublesome then acting because you have to think on how you would sound when things like being shot at, being attacked, or even falling would sound like. With me seeing the English audio track for the film, I must admit that it is one of the better films to have good English dub for. Mostly I love not the voices, but all of the additional sounds that litter inside of this film. You hear so many unexpected sounds that you would normally never hear in an animated film regardless if it is the sounds of birds chirping to far off clinging of metal. I have to give props to the people who worked on sound with this film for making it all seem so life life. Next we have the script. Like I have said before, there is nothing new here that was not already thought up of in other films and literature of the science fiction genre. But the one thing I will have to comment on is how well the complexity of the characters were. Going into this film knowing not to expect anything complex with the plot, I am pleased to find out how complex these drawn characters are. I will not say anything for fear of giving away some plot elements, but I will say that you might find yourself getting attached to these characters. Finally we have something that did take me by surprise: the score. Now, answer me this: when was the last time you heard an original Dixie Land/ Jazz score in a film? Well, this film's entire score is this fresh Jazz music that really gave the film a nice bonus while setting the tone for probably one of the greatest tributes to Stanley Kubrick's DR STRANGELOVE, OR: HOW I LEARNED TO STOP WORRYING AND LOVE THE BOMB. Overall, this is a beautiful film that might surprise some audiences if they watch it with no expectations. Just, do not think that this is a remake of Fritz Lang's masterpiece.

Very interesting, and artful japanese animation. Very high attention to details. Is great fun, yet could be a little long winded for the younger crowd. Lots of explosion and fights.

[font=Arial][color=darkred]It has the screenplay penned by Katsuhiro Ôtomo, writer/director of ‘Akira’. The director is Tarô Rin, director of numerous anime including ‘X’. And it’s based upon a classic manga by the same name. If you understood any of this, especially if you successfully identified anyone, then you are a prime candidate for ‘Metropolis’.[/color][/font] [font=Arial][color=darkred]‘Metropolis’ is a future wonderland of a city, with the coronation of Duke Red’s gigantic Ziggurat building, to which he plans to rule the world. He’s evil. Detective Shunsaku Ban and his nephew Kenichi have been hired from Japan to find an illegal organ trader who they believe has some connection to Duke Red. Sure enough, with his help the duke is building the most powerful robot named Tima who also happens to look pristinely like his deceased daughter. His adopted son Rock takes offense, kills the organ trader, and chases Kenichi and Tima through the subterranean bowels of the city. Then there’s some chase scenes. And… um… the disaster montage ending. There’s your story folks.[/color][/font] [font=Arial][color=darkred]Time for an anime checklist. Androgynous heroes? Check. Sprite looking females with super duper powers? Check. Bad guys with snozes like Toucan Sam? Check. Robots, robots, robots? Check. A story that bites off more than it can chew? Check. Gratuitous nudity and grotesque gore? Nope. Well this is a PG-13 movie.[/color][/font] [font=Arial][color=darkred]‘Metropolis’ is without a doubt one of the most beautiful animated films I have ever seen. The dazzling vistas of the city are a wonder to behold. ‘Metropolis’ is an amazing movie to watch. To say it is candy for the eyes is an understatement; it’s Girl Scout cookies for the eyes. The visuals are astonishing but the story lacks any character development. The script borrows heavily from ‘Blade Runner’, ‘Brazil’ and the original Fritz Lang silent masterpiece ‘Metropolis’. There’s also a rather dumbfounding sequence where the montage of destruction, including the annihilation of the Ziggurat, set to Ray Charles’ “I Can’t Stop Loving You.”[/color][/font] [font=Arial][color=darkred]For anime fans it all won’t matter. The film is a sight to behold. It’s gorgeous but flaccid in its thinking and plotting.[/color][/font] [font=Arial][color=darkred]Nate's Grade: B-[/color][/font]