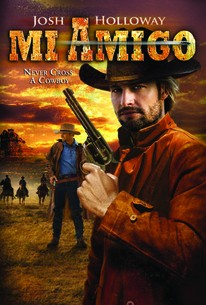 Two lifelong friends are forced to choose between peaceful forgiveness and carrying a deadly grudge in a sprawling tale of old west vengeance starring Lost's Josh Holloway. Pal Grisham (Holloway) and his best-friend Bobby Ray Burns (Channon Roe) blazed a violent path out of Cherub, Texas that would instantly bond the pair for life. Their powerful connection is soon severed, however, when one of the men commits a crime that sharply divides the pair for over three decades. Now, as Pal and Bobby Ray return home after not seeing one another for more than thirty years, both men will find themselves faced with one of the most difficult decisions that have ever had to make. Whether they choose the gun or brotherhood, neither Pal nor Bobby Ray will never be the same again.

Freddy Fender
as Bartender
View All

There are no critic reviews yet for Mi Amigo. Keep checking Rotten Tomatoes for updates!

There are no featured audience reviews yet. Click the link below to see what others say about Mi Amigo!