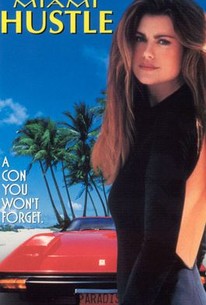 Also known as Hello, She Lied, this made-for-cable drama stars Kathy Ireland as Marsha Thomas, a professional con artist with a conscience and a surprisingly strong sense of scruples. Be that as it may, Marsha is heavily in debt to a crooked lawyer who had saved her brother Frankie (Shareef Malnik) from a prison term, thus she reluctantly agrees to participate in a scheme to cheat an innocent young woman out of a multimillion-dollar inheritance. As luck would have it, the "innocent" in question is a blonde striptease artist named Jean Ivers (Audie England) -- and in order to learn all she can about Jean to impersonate her for the purposes of the scheme, Marsha is obliged to get a job at the same strip club where Jean works. Rather surprisingly, Kathy Ireland doesn't bare all in this R-rated opus, though we see plenty of co-star Audie England and the rest of the "peelers." Miami Hustle premiered July 21, 1996, on the Showtime channel.

Joey Meara
as Secretary for Henry

There are no critic reviews yet for Miami Hustle. Keep checking Rotten Tomatoes for updates!

There are no featured reviews for Miami Hustle at this time.