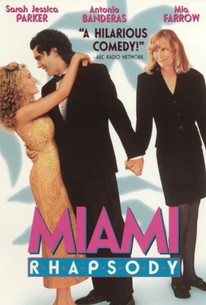 Critics Consensus: Miami Rhapsody has a handful of laughs, but wears its influences so heavily that it can't help but suffer by comparison.

Critics Consensus: Miami Rhapsody has a handful of laughs, but wears its influences so heavily that it can't help but suffer by comparison.

Critic Consensus: Miami Rhapsody has a handful of laughs, but wears its influences so heavily that it can't help but suffer by comparison.

The discovery of marital troubles in her family causes a young woman to question her own upcoming nuptials in this clever romantic comedy. Sarah Jessica Parker stars as Gwyn, a bright, slightly neurotic advertising copywriter who is initially thrilled when her boyfriend Matt (Gil Bellows) finally proposes. Soon afterwards, however, she learns that her mother Nina (Mia Farrow) is indulging in an extra-marital affair with a handsome Latin stud (Antonio Banderas). This is only the first of several shocking revelations, as Gwyn soon learns of infidelity by her father (Paul Mazursky), brother (Kevin Pollack), and even newlywed sister (Carla Gugino). These indiscretions make Gwyn question the validity of the entire institution of marriage and doubt her own future. Director David Frankel, who also penned the screenplay, follows in the footsteps of Woody Allen in using introspective dialogue to detail the romantic troubles of a wealthy, neurotic Jewish family; practiced performances and a colorful use of Miami locations give the film its own personality.

Lisa Banes
as Gynecologist
View All

Miami Rhapsody has been dismissed in some quarters as an imitation Woody Allen movie, but since the imitation and the movie are both so entertaining, I don't see what the problem is.

Looks, sounds, and feels like a Woody Allen comedy given a shot of adrenaline. (published 2-17-95)

We already have a Woody Allen, but thanks anyway for applying.

Reveals how the consumer ethic has diluted traditional views of marriage so that it is held hostage to our desires for new experiences, self-fulfillment, and endless variety