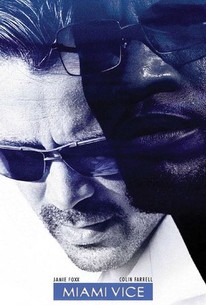 Critics Consensus: Miami Vice is beautifully shot but the lead characters lack the charisma of their TV series counterparts, and the underdeveloped story is well below the standards of Michael Mann's better films.

Critics Consensus: Miami Vice is beautifully shot but the lead characters lack the charisma of their TV series counterparts, and the underdeveloped story is well below the standards of Michael Mann's better films.

Critic Consensus: Miami Vice is beautifully shot but the lead characters lack the charisma of their TV series counterparts, and the underdeveloped story is well below the standards of Michael Mann's better films.

Get ready to go deeper undercover with Ricardo Tubbs (Jamie Foxx) and Sonny Crockett (Colin Farrell) in this Unrated Director's Edition that includes footage not seen in theaters!

Abdel Tornes
as The Courier

Julia Yarbrough
as Herself

Miami Vice is a movie made by a man whose mastery of the medium, and whose obsessive concerns for detail, put images of uncommon distinction on the big screen.

Everyone in this story, apart from our dissembling heroes, turns out to be exactly what they seem.

This somber action picture bravely defies expectations and gives us something wholly new.

In retrospect it is clear that the rapturous Miami Vice is the work Mann has been building to.

Mann has elected to turn this Vice into something altogether leaner and meaner - if not necessarily tighter.

Why, in the present complex and volatile circumstances, make this particular film? A mediocre, mildly entertaining, clichéd action film, about drugs and police?

Foxx and Farrell seem slightly out of place both as undercover drug runners and as police officers.

A good movie full of ups and downs, with excellent portions of great action cinema. [Full Review in Spanish]

One of the great American movies of the new millenium, and, quite simply, the most sensuous action movie I've ever seen.

What this film seriously lacks in a coherent and discernable plot and character development, it more than makes up for it with tons of style, great cinematography, and well-placed tension. The gunplay (what little there is), is done well, and even though the film is more style than substance, and could stand to be trimmed up greatly, it's a thinking man's drama/thriller, and not a blockbuster action film. Unfortunately, it's called Miami Vice, and features characters taken from the classic 80s show. I have no problem with a film adaptation of Miami Vice, but Mann, who was a major creative force behind the show, should have known better, as well as done better. Unable to get the music, and some other elements from the show due to legal issues, he had to update things and come up with new stuff. My feeling though, is that if you aren't able to truly make the film you want to make, then why bother? They should have called it something other than Miami Vice, and changed the character names. That would have made this a better film. Also, the story here is really incoherent, muddled, and doesn't make a whole lot of sense. It's also really long (especially the director's cut), and filled with a lot of filler subplots that just don't work for me, even with the decent use of mood, tone, and atmosphere. Some of the music is okay, but don't get me started on the Phil Collins cover, and especially how it's used. As far as casting, Farrell and Foxx are fine, but Barry Shabaka Henley sucks as Castillo, and, though she is pretty, Li Gong can't act or even speak English for crap. I love Michael Mann, but I really wanna know what went wrong. It's hard to defend this one and feel good about it, and, even when it does get something right, it gets overshadowed by everything that's wrong. At least some of the cinematography (daytime exteriors especially) is great. Overall though, this is a tedious, boring, and poor adaptation that really could have worked, but only if major changes took place.

Action: Realistic and engaging (except for the last gunfight where some fool shoots under a car... you'll see why). Plot: Absolutely horrible with one of the worst chemistries put into film (between Colin Farrell and some asian chick). It could've been great, but there were way too many problems with this highly stylized but lacking movie.

I might be one of the only people that thoroughly enjoy and respect Michael Mann's full length adaption of his t.v. series. I just think it has all the great things about cop dramas and all of the great techniques of Michael Mann. The digital video is ridiculously fitting for a movie about two Narcs in the middle of a gangster conflict. I guess you have to like the two stars of the movie, Colin Ferrell and Jamie Foxx, who carry their own fanbases and hate groups. For someone who's a fan of both, I thought it was an amazing team up and their chemistry was great together. This is clearly a movie that you have to want to watch and get into, not just something for casual viewing. This is extremely hard around the edges and has very little light-hearted moments. It's extremely gritty and a different kind of cop movie than we're used to seeing. I love how Miami Vice is serious about its goals and beautiful style. The plot is one of the more fine tuned and seems like it could possibly happen in a real-life scenario. Crockett and Tubbs got rid of their nutball clothes and were turned into some truly hard as nails cops.

Director Michael Mann does a retread and modern film version of his highly successful 1980's television series and despite the calibre of Mann, this turns out to be just like all the other poor makeovers of hit t.v shows. Detectives Sonny Crockett (Colin Farrell) and Ricardo Tubbs (Jamie Foxx) work undercover investigating narcotics-smuggling in Florida. But when Crockett falls for the beautiful wife (Gong Li) of a powerful arms and drugs trafficker, and Tubbs' loved ones come under threat, their personal and professional lives start to mesh together. Much like "Heat" and "The Insider", with similiar wonderful cinematography (complete with intense close-ups and methodical pace), giving the impression that we're involved in the action. Problem is though, the action is not exciting enough. It's too slow. Far too slow. This had real potential and from the beginning it looks like we're going to be treated to another classic like the previous films mentioned but the normally reliable Michael Mann (especially in this genre) delivers a damp squib. Foxx and Farrell make a great Tubbs and Crocket, full of style and intensity but they're left to basically wander around for over two hours, looking mean, tanned and brooding. The editing and camerawork are excellent in capturing the urban landscape of Miami but it's not enough. It is without doubt, all style and no substance. All buck and no bang and definitely no bark OR bite. It took me three attempts to get through it, without falling asleep and that's just not what you expect with the style and excitement of a usually on-form Michael Mann. A massive let down. Mann can do much better than this, with the most impressive thing about it being how Farrell managed to get away with successfully sporting a mullet and handlebar 'tashe. Not an easy combination and more impressive than the film itself.