Michael Jackson's Journey From Motown to Off the Wall (2016) 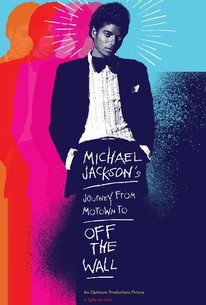 Michael Jackson's Journey From Motown to Off the Wall Photos

One morning, a television set broke down in a living room in Gary, Indiana, leaving a large family of children with nothing to do, so they started singing. Soon the family was singing at talent shows and winning trophies. Their first four recorded songs would top the charts, and launch the career of one of the greatest entertainers the world has ever known. Journey from Motown to Off the Wall allows audiences to travel with Michael as he gets his start at Motown, strikes a new path with CBS records, and forges a relationship with legendary producer Quincy Jones. An illuminated portrait emerges of how an earnest, passionate, hard-working boy would become the "King of Pop".

It's just plain bursting with joy - it's a documentary that feels like the music it's about.

Of course Jackson isn't here to discuss matters for himself, and Lee's documentary is, ultimately, enjoyably nostalgic, but says little more than what we already know.

This bouncily entertaining doc may boast only a notch more formal ambition than a very well-assembled "Behind the Music" special, but is no less essential than Lee's first MJ opus, the excellent "Bad 25."

Lee keeps his celebration smart and not soppy. He gets you excited, makes you feel the moment, see what was new in it, why it mattered.

He's made a fan's film, and he's happy to let us know it, shouting out questions from behind the camera and cackling loudly when he particularly likes an answer.

In a sense, it's a remembrance of things past for all of us.

The second installment of Spike Lee's definitive chronicle of Michael Jackson's career. Hopefully all of MJ's albums will get the same treatment.

Journey from Motown to Off the Wall is a friendly, warm, and inviting documentary that dances and shouts without ever shaking its body down to the ground.

Spike Lee's follow-up to Bad 25 shines a light on the King of Pop's indisputable talents, but is otherwise alarmingly lightweight.

This is mainly a doc of talking heads, but when they have the faces of Stevie Wonder, Pharrell Williams, producers Mark Ronson and Rodney Jerkins, film director Lee Daniels and Michael Jackson's own mother, it's spellbinding.

A movie called Michael Jackson's Journey that leaves out the personal dimension of his transformation is missing a key part of the story.

A great documentary on one of the best pop albums in history. Spike Lee shows us and reminds me how much of a genius Michael Jackson was. Great to watch.

Michael Jackson's Journey From Motown to Off the Wall Quotes