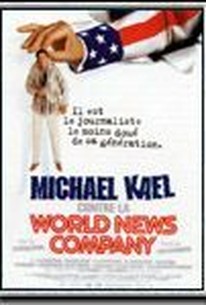 Christophe Smith made his directorial debut with this media satire, set on December 14, 1999, about a TV news network in cahoots with Washington on Operation Crazy Guru -- a plan to get a U.S. president re-elected for a third term. Griffith (Mickey Rooney), head of the Miami-based international World News Company, decides inept Paris correspondent Michael Kael (Benoit Delapine) is gullible enough to report the staged events, so Kael is sent off to Africa to cover a two-day fest in Katango. International nets air nuke threats by a Japanese nutcase, made on tapes sent from Katango. Kael, of course, has been unwittingly set up as WNC's key reporter, but everything goes haywire once Kael deduces that it's all being faked. The screenplay, by Delapine, is an expansion of comedy sketches that originated on two popular French cable TV shows. ~ Bhob Stewart, Rovi

There are no critic reviews yet for Michael Kael contre la World News Company. Keep checking Rotten Tomatoes for updates!

There are no featured reviews for Michael Kael contre la World News Company at this time.