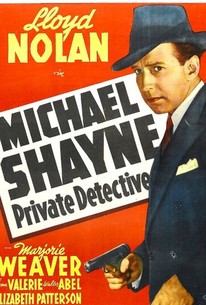 Brett Halliday's flippant Irish-American private eye Michael Shayne was first brought to the screen by 20th Century-Fox in 1940, with Lloyd Nolan cast to perfection as Shayne. In dire financial straits as usual, Mike allows himself to be hired by his millionaire pal Brighton (Clarence Kolb) to keep the old man's chronic-gambler daughter Phyllis (Marjorie Weaver). This won't be easy, since Phyllis has been associating with such hardcase types as gambling boss Gordon (Douglas Dumbrille) and his handsome flunkey Harry Grange (George Meeker). To teach Phyllis a lesson, Mike knocks out Harry and makes it look as though the man was murdered. Unfortunately, Harry ends up murdered for real, and soon both Mike and Phyllis are high on the suspect list. Our hero manages to expose the real murderer with the assistance of Phyllis' maiden aunt Olivia (Elizabeth Patterson), an eccentric mystery-novel enthusiast. An expert blend of comedy and suspense, Michael Shayne, Private Detective (based on Halliday's novel Dividend for Death) bode well for the brief "Shayne" series that followed.

Irving Bacon
as Fisherman
View All

There are no critic reviews yet for Michael Shayne, Private Detective. Keep checking Rotten Tomatoes for updates!

Breezy mystery made all the better by Lloyd Nolan and a game Elizabeth Patterson.

This is just one of 4 movies in a Michael Shayne collection. Glad I came across this one, very enjoyable, a smart witted and comical detective who is out to solve any crime. Worth 5 stars