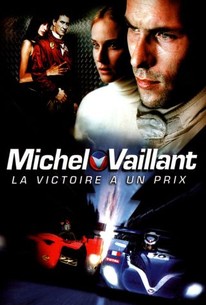 A popular French comic strip of the 1950s becomes a candy-colored feature film in this race-car adventure. The Leaders and the Vaillants are rival families of Formula One car drivers, the former group devious and cutthroat, the latter benevolent and amiable. But when the hallowed Le Mans 24-hour race is at hand, both clans find that they'll resort to anything to win. With many of its scenes filmed at the real Le Mans race in the summer of 2002, Michel Vaillant was co-produced by international crossover success Luc Besson.

There are no critic reviews yet for Michel Vaillant. Keep checking Rotten Tomatoes for updates!

There are no featured audience reviews yet. Click the link below to see what others say about Michel Vaillant!