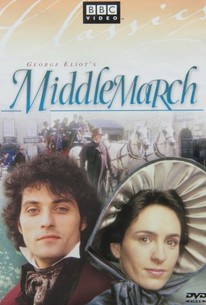 The BBC has raised the mini-series to an astonishing creative peak. A prime example is the 1994 production of Middlemarch, based on the classic novel by George Eliot, which juxtaposes morals and money, grand ambitions with petty jealousies, and pursuits of the mind with bodily needs. A handsome young doctor named Lydgate (Douglas Hodge, Vanity Fair) comes to the provincial town of Middlemarch to start a new hospital; a headstrong young woman named Dorothea (Juliet Aubrey, The Mayor of Casterbridge) yearns to contribute to the greater good of the world. These idealists enter into marriages that derail all their intentions and lead them into lives they never imagined. The network of characters in this six-episode program, ranging up and down the societal ladder, create an intricate and utterly engrossing narrative as well as a magnificent recreation of life on the cusp of the Industrial Revolution. The cast, from the largest to the smallest roles, is impeccable. When a scene turns to a character you've only glimpsed before, the precision of the writing (by miniseries master Andrew Davies, Pride and Prejudice) and the vivid performances suck you into the life of this person who seemed like mere background scenery only moments before. The cumulative impact of Eliot's story will leave you gasping at its brilliant balance of romance and reality. Performers include creepy Patrick Malahide (The Singing Detective) and sexy Rufus Sewell (Dark City) among the familiar faces of dozens of inspired character actors. Don't let the literary pedigree of Middlemarch scare you off--the plot is as juicy as a soap opera, with a psychological fullness that makes every dramatic turn all the more gripping. --Bret Fetzer

There are no critic reviews yet for Middlemarch. Keep checking Rotten Tomatoes for updates!

There are no featured audience reviews yet. Click the link below to see what others say about Middlemarch!