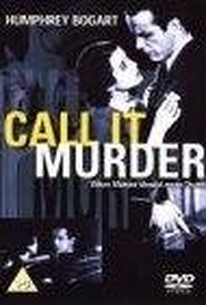 The old "If it were your own daughter" plot device forms the basis of the independently-produced crime melodrama Midnight. O.P. Heggie plays jury foreman Edward Weldon, who has no qualms about sentencing a woman to death for a crime of passion. His unpopular decision makes Weldon persona non grata even in his own home, but he sticks to his firm belief that all murderers must pay the supreme penalty, no matter what the provocation. He soon has cause to regret his intractability when his own daughter Stella (Sidney Fox) kills a former lover who betrayed her. In addition to Humphrey Bogart, who plays the small but memorable role of one of the murder victims, this New York-filmed oddity also features such Broadway-bred talent as Margaret Wycherly, Henry Hull, Granville Bates, Helen Flint, and, in their film debuts, Lynne Overman and Richard Whorf. Midnight was later reissued by Astor Films as Call it Murder to cash in on Bogart's latter-day popularity (Bogie was also "promoted" to top billing in the refilmed opening credits).

There are no critic reviews yet for Midnight. Keep checking Rotten Tomatoes for updates!

Another Excellent Humphrey Bogart Movie, I saw it under the title of Call it murder. great plot. Good twist at the end. Its an Oldie but goodie. give it a try and you will find your sel stuck on Bogart Movies. Its in My Collection