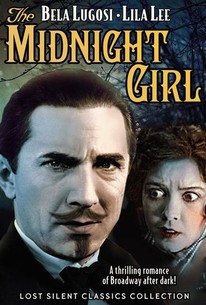 This melodrama, which starred Lila Lee, had quite a few names in the cast that were well known at the time but are largely forgotten now: Gareth Hughes, Dolores Cassinelli, and stage star Charlotte Walker. It also featured someone who was relatively new to pictures, but who eventually found fame in the talkie era: Bela Lugosi. Don Harmon (Hughes) is the son of opera impresario Nicholas Harmon (Lugosi). The elder Harmon is involved with Nina, an opera singer (Cassinelli), and the affair causes a rift between father and son. Don makes his own living as an orchestra leader in a café, and helps out Anna, a talented young Russian immigrant (Lee), by getting her a job as a dancer in the "Midnight Girl" number. Since Nina is past her prime, Nicholas is growing bored with her and decides to look for fresh talent, which he finds in Anna. Anna refuses to have anything to do with him, however, until Don's ex-fiancée, Natalie Schuyler (Ruby Blaine), asserts that she is still engaged to him. Anna then goes to Nicholas who tries to force himself on her while Nina angrily watches from behind a curtain. When Natalie's attempts to reunite with Don are unsuccessful, she tells him that Anna is at his father's apartment. He rushes down there just as Anna tries to shoot Nicholas. Nina is wounded, and Nicholas realizes he still cares very much for his mistress. They are reconciled, while Don marries Anna, who goes on to become an opera star.

Flora Finch
as Landlady
View All

Critic Reviews for The Midnight Girl

The silent drama has Bela Lugosi sporting a goatee.

Audience Reviews for The Midnight Girl

A melodramatic, but somewhat exciting movie (only because of Lugosi). Overall it's so-so.