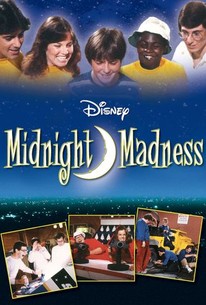 The crux of this limited, juvenile comedy is a complex game that begins at midnight and ends by morning. Of main interest is the fact that a young Michael J. Fox plays one of the students involved in the game. Leon (Alan Solomon) has spent a year creating the game and practically needs that long to convince his fellow students to play it. Eventually he wins out, and the various teams of classic stereotypes -- the nerd, the well-groomed hero, the obnoxious sorority sister, the easily duped freshman, and others -- all converge on Los Angeles at midnight. Their treks take them through the Griffith Observatory which because of those odd hours astronomers keep, could conceivably be open. Other locales are interestingly open too, apparently Los Angeles never sleeps.

Debi Richter
as Candy
View All

It's a pleasant, well-meaning little comedy, and it's obviously trying for the same kind of innocent, sophomoric humor that was so charming in "Junior High School." But it just doesn't have the same magic.

A fun college themed movie, one of the best from 1980. The story deals with a scavenger hunt, so it's both a comedy and an adventure. I loved it.