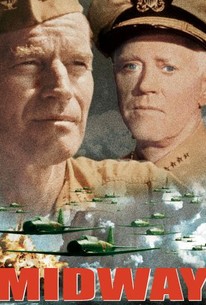 An expensive war epic, Midway emulates The Longest Day and Tora! Tora! Tora! in attempting to re-create a famous World War II battle from both the American and Japanese viewpoints. The 1942 battle of Midway was the turning point of the War in the Pacific; the Japanese invasion fleet was destroyed, and America's string of humiliating defeats was finally broken. Though the battle itself was sufficiently dramatic to fill two films, Midway also has plotline involving the mixed-race relationship between Ensign Garth (Edward Albert), son of Navy Captain Matt Garth (Charlton Heston), and Haruko Sakura (Christina Kokubo), a Hawaiian girl of Japanese descent. The real-life personages depicted herein include American Admirals Nimitz (Henry Fonda), Halsey (Robert Mitchum) and Spruance (Glenn Ford), and Japanese Admiral Yamamoto (Toshiro Mifune, his voice once again dubbed by Paul Frees, whom Mifune personally selected for the job). For its original road show release, Midway was offered in the "Sensurround" process, which electronically shook and vibrated the audience's chairs during the battle sequences. ~ Hal Erickson, Rovi

War movies used to have dash and color and a certain corny sentimentality; Midway hardly even makes us care.

[Midway] builds up a lot of tension about that battle, but delivers nothing new.

The script is confusing and messy, with attention exclusively paid to the strategic problems of both sides, and its development is crude, dry, and boring. [Full Review in Spanish]

There are few surprises here, yet the feature remains dependably engaging and charmingly acted, helping the production hurdle a few questionable artistic choices as it attempts to resurrect history over 30 years after the fact.

To make an uninvolving movie out of one of the most decisive battles of the Second World War may seem a dubious challenge, but there's no denying Universal their full credit in meeting it.

Rather dull, although certainly elaborate enough

Charlton Heston at his restrained yet forceful best.

has the decency to devote the majority of the film to the actual events, and not get bogged down in a fictitious, smarmy love affair.

If the movie drags a bit in the dramatics department, that's probably because the filmmakers were shooting for 'accuracy' over 'emotion'.

Blow by blow recital of the facts of the famous WWII Pacific sea battle delivered by faces you know and love makes for a cozy history lesson. The nutty love story thrown in for the ladies is not only distracting but irrelevant. All in all not a terrible waste.

I can't help but think that a certain amount of entertainment value was sacrificed for the sake of historical accuracy.

Like Flixster says, "Midway feels more like a history lesson than a drama". Still, it is history I am only vaguely aware of, so that is fine, but the movie seems long. There are a lot of famous faces in the movie. This film uses a lot of actual battle footage.