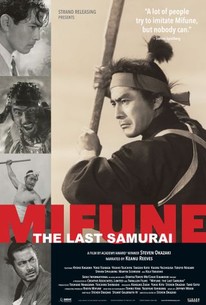 Critics Consensus: Capturing the breadth of Toshiro Mifune's storied career, if not fully reckoning with the depth of the man, The Last Samurai is a compelling celebration of one of cinema's greatest stars.

Critics Consensus: Capturing the breadth of Toshiro Mifune's storied career, if not fully reckoning with the depth of the man, The Last Samurai is a compelling celebration of one of cinema's greatest stars.

Critic Consensus: Capturing the breadth of Toshiro Mifune's storied career, if not fully reckoning with the depth of the man, The Last Samurai is a compelling celebration of one of cinema's greatest stars.

Mifune: The Last Samurai, a new film by Academy Award-winning filmmaker Steven Okazaki, explores the accidental movie career of Toshiro Mifune, one of the true giants of world cinema. Mifune made 16 remarkable films with director Akira Kurosawa during the Golden Age of Japanese Cinema, including Rashomon, Seven Samurai and Yojimbo. Together they thrilled audiences and influenced filmmaking around the world, providing direct inspiration for not only The Magnificent Seven and Sergio Leone and Clint Eastwood's breakthrough, A Fistful of Dollars, but also George Lucas' Star Wars.

The film works best as an appetite stimulant for richer cinematic fare.

Nobody in cinema can rival the unique, electric combination of scowling power and exuberant physicality of Mifune.

This concise documentary focuses largely on his artistic partnership with Akira Kurosawa but includes enough about Japan's film industry and the star's charmed life to engross fans and casual viewers alike.

A smart and thoughtful examination of who the man was and how he got that way.

Has any movie star had a harsher laugh, or more baleful stare, than Toshiro Mifune? He needed no words to have an impact onscreen. He just needed to be.

A dutiful and diverting but rather bare-bones documentary portrait ...

Mifune: The Last Samurai benefits from insights from the subject's family and friends, and from a large stash of clips, from films whose DNA has become a vital part of our postmodern sensibility.

The Last Samurai manages to appeal to both die-hard fans and newcomers looking for an entry point into Mifune's vast filmography.

To the extent that The Last Samurai lets you watch clips from these and other Mifune films, it's as good a time as you could want to have in a movie theater.

What the film does succeed at is reminding us what a genius Mifune was and hopefully it will inspire a new generation to discover him.

Serves as a fascinating primer on one of the movies' undisputable Icons, as well as taking care of a viewer's to-watch list for months.

"Mifune: The Last Samurai" functions best as an introduction to one of Cinema's most disciplined and unique actors.

For fans of the actor Toshirô Mifune this is a must see doc. While I'm hesitant to say any movie less than an hour and a half about the life of a person can tell you everything you need to know as compared to if you read a book or two about their life and career, this piece of non-fiction pretty much covers all the major events. And it does it entertainingly. There are lots of interviews by people who knew him, and other filmmakers who respected him from afar. All the exciting clips from this mesmerizing performer do much for this documentary about this star who was bigger than life on the big screen. And then seeing archival photos from his childhood and other behind the scenes stuff is so cool for a fan who is mainly only familiar with the roles he played. He really was a master martial artist and embodied the samurai spirit. It was the only way he could have done all the stunts and fights in his films himself.