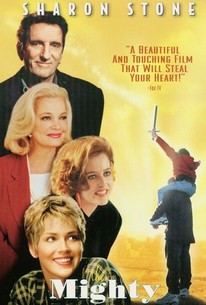 Critics Consensus: Spirited and sweet with an emphasis on the healing power of friendship, The Mighty is a modest charmer that comes by its whimsy honestly.

Critics Consensus: Spirited and sweet with an emphasis on the healing power of friendship, The Mighty is a modest charmer that comes by its whimsy honestly.

Critic Consensus: Spirited and sweet with an emphasis on the healing power of friendship, The Mighty is a modest charmer that comes by its whimsy honestly.

Peter Chelsom directed this family film in the tradition of My Left Foot (1989). Charles Leavitt scripted this adaptation of the young-adult novel Freak the Mighty (Blue Sky/Scholastic, 1993) by 45-year-old Rodman Philbrick. Big and burly eighth-grader Max Kane is learning disabled, but after he meets the brilliant and brainy Kevin (Kieran Culkin), crippled by a birth defect, the two realize they can become an unbeatable team. Kevin, who wears leg braces and uses crutches, suffers from Morquio's Syndrome, which causes physical growth to stop after the age of six. Max is portrayed by 19-year-old Emerson College filmmaking student Elden Hanson, while Sharon Stone plays Kevin's mother.

Dov Tiefenbach
as Doghouse Boy No. 1

Michael Colton
as Doghouse Boy No. 2

Daniel Lee
as Doghouse Boy No. 3

Ron Nigrini
as Man in Diner

Nadia Litz
as Girl in Diner

Serena Pruyn
as Girl in Hall

Telmo Miranda
as Boy in Hall

Charlaine Porter
as Girl with Limp

News & Interviews for The Mighty

View All The Mighty News

Critic Reviews for The Mighty

What I liked most about the movie is the way it shows that imagination can be a weapon in life.

Decently acted but only moderately inspiring.

Celebrates imagination as the firepower that enables these two outsiders to transcend their disabilities, loneliness, and familial problems.

The film is barely watchable when [Gillian Anderson is] on screen.

A tearjerker that isn't shallow and obvious about pulling the emotions out of you, and can actually be viewed more than once without blowing its shelf life.

Audience Reviews for The Mighty

Wonderfully written story, about two young bully victims - both outsiders and disabled in their own way - who find a best friend in each other, and together overcome their burdens and tormentors. Kieran Culkin is really funny as the clever and quirky "Freak", and shows that the talent in the family isn't limited to his brother Macaulay. Equally positive comments can be applied to the rest of the cast. Everyone plays their role to perfection and gives it their very best. But what I love most about the film is the way it is told. A great narration - divided into chapters like a book - and with an homage to the classic tale of King Arthur and his knights. A film for the heart, that provides hope, humor and a well-needed message. See it and enjoy an inspirational piece of film-making.

i had read the book and it's much better then this movie. I thought this was good though. it had some stupid parts that I didn't like, like te king arthur things. I think they could have made the end better. the ending wasn't as powerful as it could have been. it was a good movie though but it's not really great. B

The Mighty is about two kids who together are much more than each is separately. The acting of the two kids is great, and I don't know how they convinced the supporting cast of adults (Sharon Stone, X-File's Gillian Anderson, Meatloaf, Gena Rowlands) to join the cast. I found the story moving and predictable as it moved to its inevitable conclusion, but still a pretty good film.

There are good times and sad times had by the two boys. I could barely survive the sadness. It was great seeing Sharon Stone and Gillian Anderson.