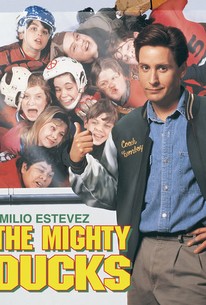 Critics Consensus: The Mighty Ducks has feel-good goals but only scores a penalty shot for predictability.

Critics Consensus: The Mighty Ducks has feel-good goals but only scores a penalty shot for predictability.

Critic Consensus: The Mighty Ducks has feel-good goals but only scores a penalty shot for predictability.

After a Minneapolis lawyer (Emilio Estevez) is sentenced to community service for a drunk-driving conviction, he begins coaching a pee-wee league hockey team made up of misfits and delinquents. Haunted by past shortcomings while on the ice, he tries to coach teamwork on the way to the cup. A big box-office success, The Mighty Ducks eventually spawned a series of sequels during the rest of the '90s.

Vincent A. Larusso
as Adam Banks

Bob Miller
as Announcer
View All

News & Interviews for The Mighty Ducks

10 TV Shows You Should Binge-Watch This March
How Many Movies Have You Seen In Your Entire Life?
Young Lecter Poses for a Few Pics

View All The Mighty Ducks News

Critic Reviews for The Mighty Ducks

While nicely layered with tough, conflicting personal questions, Ducks ultimately flaps off into easy outcomes and pat contrivances. Still it's an overall charmer, and director Stephen Herek keeps it flying with a nifty mix of slapstick and action.

The film is remarkably oblivious to the fact that if the team weren't hell-bent on a championship, young moviegoers would be significantly less interested in its adventures.

Those not yet wise to formulaic pablum are likely to enjoy this ice hockey kiddie ensemble comedy. But their older escorts might want to bring a novel and a flashlight, or a Walkman or portable television with earphones.

I can understand why these unknown child actors were involved with this movie but as for the grown-ups, all I can figure is that they were each fulfilling some kind of community service obligation.

It must be said that this movie is sweet and innocent, and that at a certain level it might appeal to younger kids. I doubt if its ambitions reach much beyond that.

A decent enough kids picture, with some laughs and the always required sports element: heart.

A pleasing and entertaining sports film, and one that can be appreciated by a wider audience thanks to its solid writing, and strong performances.

Harmless enough, but its schematic retread of a screenplay and its lethargic acting detracts from the unassuming, passable entertainment it might have been.

I chose to work as a cashier at a gas station over being an extra in this. I chose wisely.

Audience Reviews for The Mighty Ducks

The Mighty Ducks may not be the best family film, but for what it is, it's still a film that's enjoyable to watch with your family. For a Disney sports film, this is actually pretty good entertainment. The film is pretty funny and has a pretty decent cast of actors. Of all The Mighty Ducks films, this is the best film. Though this isn't the best sports film, The Mighty Ducks is still a worthwhile sports comedy that is much under appreciated. This is a very entertaining sports comedy, and though it's not as memorable as many other sports comedies, The Mighty Ducks is nonetheless a good film with good laughs. The film could have improved, sure but as a whole this still a very good, underrated film that though not perfect doesn't deserve the flack it has received. The cast is pretty enjoyable and director Stephen Herek directs an effective family film that is far better than most other Disney films that are just plain dumb such as Heavyweights. Emilio Estevez, although not in his best performance (for his best look at The Breakfast Club and Young Guns 1, 2) is good here. I thought this was better than the usual Disney output of mindless, dumb family oriented films, and this is a good film that is quite enjoyable despite its flaws. I enjoyed this, thought it was very amusing and fun to watch. For what it is, The Mighty Ducks is a much underrated family film does deliver a good, entertaining time for the family. Give it a chance and it may surprise you at how good this film really is.

Saw it again!!! The movie sure is great and inspirational. One of my favorite movies growing up, I was 10 when it came out on the bigscreen. Love it!!! Gordon Bombay, a hotshot lawyer, is haunted by memories of his childhood, when, as the star player in his champion hockey team, he lost the winning goal in a shootout, thereby losing the game, and the approval of his coach. After being charged for drunk driving, the court orders him to coach a peewee hockey team, the worst in the league, Gordon is at first very reluctant. However, he eventually gains the respect of the kids and teaches them how to win, gaining a sponsor on the way and giving the team the name of The Ducks. In the finals, they face Gordon's old team, coached by Gordon's old coach, giving Gordon a chance to face old ghosts.

Just watched this with my daughter. her first viewing. I loved this movie as a kid and enjoyed it as Erin cheered it on!