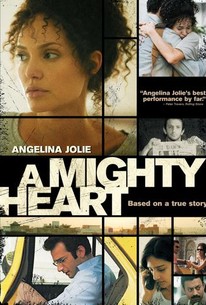 Critics Consensus: Angelina Jolie conveys the full emotional range of a woman in a desperate situation in A Mighty Heart, an urgent yet tactful film about a difficult subject.

Critics Consensus: Angelina Jolie conveys the full emotional range of a woman in a desperate situation in A Mighty Heart, an urgent yet tactful film about a difficult subject.

Critic Consensus: Angelina Jolie conveys the full emotional range of a woman in a desperate situation in A Mighty Heart, an urgent yet tactful film about a difficult subject.

On Jan. 23, 2002, Mariane Pearl's world changed forever. Her husband Daniel, South Asia bureau chief for the Wall Street Journal, was researching a story on shoe bomber Richard Reid. The story drew them to Karachi where a go-between had promised access to an elusive source. As Danny left for the meeting, he told Mariane he might be late for dinner. He never returned. In the face of death, Danny's spirit of defiance and his unflinching belief in the power of journalism led Mariane to write about his disappearance, the intense effort to find him and his eventual murder in her memoir "A Mighty Heart: The Brave Life and Death of My Husband Danny Pearl." Six months pregnant when the ordeal began, she was carrying a son that Danny hoped to name Adam. She wrote the book to introduce Adam to the father he would never meet. Transcending religion, race and nationality, Mariane's courageous desire to rise above the bitterness and hatred that continues to plague this post 9/11 world, serves as the purest expression of the joy of life she and Danny shared.

Will Patton
as Randall Bennett

Daud Khan
as Masud the Fixer

Ahmed A. Jamal
as Khawaja

Sean Chapman
as US Journalist

Nour Ayad
as Ibrahim the Cook

Imran Hasny
as Journalist at Sheraton

Mike Rosen
as US Journalist

Jenni Lee
as US Journalist

Elizabeth Danheim
as US Journalist

Tom Spencer
as US Phone Journalist

Gigi Ledron
as Woman in Orange

News & Interviews for A Mighty Heart

View All A Mighty Heart News

Critic Reviews for A Mighty Heart

Winterbottom tells the story in a similar docudrama vein: hand-held digital camera, a real feel and journalistic approach. There's an urgency in the way he shoots the restless Karachi streets.

Knowing how this harrowing story played out in real life doesn't diminish its power in the slightest.

Although it is impossible to erase the spectre of Brangelina from your mind altogether while watching Jolie inhabit the role of Mariane Pearl, you can manage it for surprisingly long stretches at a time.

Jolie, dominating nearly every scene, is rather remarkable in this star vehicle, effectively conveying a convincing combination of unwavering dedication and the dire desperation of a woman who insists on remaining at the center of the search for her man.

Aside from casting Jolie, the bravest decision was to shoot largely in Karachi. The risk pays dividends with highly evocative location work that allows you almost to the smell that crowded city and feel the chaos.

A Pearl in the rough.

No preaching and no proselytizing. Just a horrible happening in a continually complicated world.

[Jolie's] stunning performance is a career best and a powerful dedication to the strength and bravery of the real life Mariane Pearl.

The film would be nothing without Angelina Jolie's brave, powerful performance.

It is to director Michael Winterbottom's (24 Hour Party People, Welcome to Sarajevo) credit that he can achieve such a powerful film without bludgeoning his audience with the images of the unspeakable violence that were inherent in Pearl's last days.

Angelina Jolie continues to prove her acting is worth more discussion than her personal life. It's not always fun to watch, but it's an important piece of work.

Audience Reviews for A Mighty Heart

I really liked the fact that they kept it as real to life as possible and I believed that this had happened; although on a downside it made the film rather slow at times. Also I found it difficult to keep up with what was happening when there were several similar looking men pacing around and talking in a foreign language with no subtitles, it was difficult to figure out what was happening. Jolie gave a fantastic performance and I believed her as Mariane. It was heartbreaking to see her pain at finding out about her husbands execution. It did seem a bit strange however that she remained focused and in control of her emotions for the rest of the time after his death. I don't know if that was true of the real Mariane or not, but it is strange.

More thrilling - and much less weepy - than I expected, and a film in which Angelina Jolie carries out her role incredibly naturally, save for one scene, when the drama's at its highest, where she goes over the top. On the whole, A Mighty Heart was a surprise: an accessible adaptation of a difficult-to-understand true story that was helped along by decent performances from a group of relative unknowns. Worth seeing once.

This is the true story of the kidnapping and murder of Daniel Pearl, American journalist in Pakistan after 9/11. His widow, Mariane (also a journalist), wrote her memoirs of the event and is convincingly played by Angelina Jolie,(who i believe gave an outstanding performance). Even though we all know how things turn out, the movie is gripping early on and is worth seeing ~!

First, I have to say that I had no interest in this film, but someone bought me the DVD and, at last, I decided to give it a go. Even though this story is loyally based on true events, I constantly had the impression A Mighty Heart brought nothing new to the screen. Most of the film is an awful mess, with a clumsy direction and a very normal screenplay. Angelina Jolie handled well her French accent, but her performance was not that exceptional. The emotional aspect of the movie is not enough exploited and when it is, I just wanted to shut off the TV. Really, I didn't like this movie and I knew I wouldn't. I know it's an important movie and we all should watch it. I'm glad I finally did, but it still didn't impress me a bit.