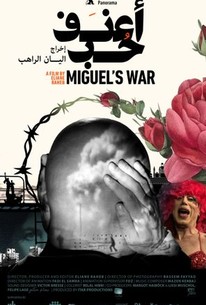 MIGUEL'S WAR is the story of a gay man who grew up oppressed and shamed during the Lebanese civil war. Raised by a conservative Catholic father and an authoritarian Syrian mother, teenage Miguel was inhibited by a deep inferiority complex and was incapable of asserting himself. In 1983 the deeply sensitive boy, desperate to prove he "exists" and can act like "a real man" joined the fighting as part of an armed faction. But his experience was a failure. Traumatized he immigrates to Madrid, Spain. In post-Franco Madrid, Miguel seeks to liberate himself through debauchery. A string of destructive relationships lead him to a failed suicide. Trying to pull himself together, Miguel becomes a conference interpreter in Barcelona. Only then, thirty-seven years after leaving Lebanon, Miguel feels ready to face his trauma and the ghosts of his past, and hopes to regain his emotional balance and maybe even find love. Using intertwining cinematic forms, melding documentary, animation, theater and archive and filmed on location in Lebanon and Spain, this feature film hopes to offer an experience of self-confrontation, awareness and catharsis.

By focusing on one person, the breadth of Lebanon's troubled collective experience is uncovered, and with humor, honesty and a common humanity it can be brought into the open for potential healing.

At times frustrating but always rooted in relatable honesty.

Shows the possibilities of cinema as an instrument of healing. [Full review in Spanish]

It's a powerful portrait of a person and place, and one of the most impressive documentaries of the year.

Taking cues from Shirley Clarke's "Portrait of Jason" (1967), Raheb takes a no-holds barred approach, not flinching from asking tough questions while not compromising the dignity of her subject.

"For Raheb, it was just as important to include takes of Miguel (jokingly) calling her a bitch, declining to answer questions, and struggling to recall the truth than it was to include his eventual honest answers."

There are no featured reviews for Miguel's War at this time.