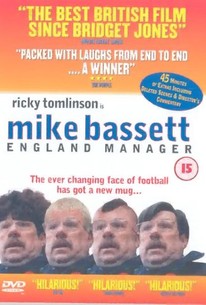 The great British obsession with football (soccer to Americans) receives a thorough skewering in this mock documentary look at perhaps the most hapless coach in the history of professional sport. The manager of England's national football unexpectedly succumbs to a heart attack, and suddenly the search is on for a replacement. Most people who seem qualified for the position have the good sense to turn it down, and so the responsibility falls to Mike Bassett (Ricky Tomlinson), a scruffy and loud-mouthed lout whose claim to football fame is leading a previously undistinguished team to a league championship. Bassett insists that England will win the World Cup under his leadership, but that's before he replaces his star player with a once-gifted footballer (Dean Lennox Kelly) who has since developed a drinking problem, and hired a one-time car salesman (Philip Jackson) as his assistant. After several stunning losses to Poland, Bassett goes from a favorite of both fans and the press to one of the most hated men in England; hoping to whip his team into shape, he subjects them to the high-tech training methods of eccentric Dr. Shoegaarten (Ulrich Thomsen), which injures more players than it helps. Despite Bassett's ineptitude, England manages to qualify for the World Cup tournament thanks to a loophole in the rules, and he flies to Rio with his team in hopes of somehow turning their bad luck around. British television journalist Martin Bashir, musician and comic Keith Allen, and international football sensation Pele all appear as themselves to lend Mike Bassett: England Manager an air of authenticity. ~ Mark Deming, Rovi

Martin Bashir
as Himself

Keith Allen
as Himself
View All

Despite its underdog charm endearing it to some at the time, this 2001 British mockumentary now resembles an ancient piece of soccer history.

There's just not enough great gags in Mike Bassett to make it funnier than Kevin Keegan's time in the England hotseat.

Such an unnecessary movie, shot in a crummy pseudo-documentary style

This is quite a funny look at what happens when the Football Association put a manager from a lower league in charge of the international team.Cue some good gags and funny lines and the inevitable downfall of the England team.This isn't briliant but you do have a laugh along the way and you do feel sorry for Mike Basset at times,played well by Rick Tomlinson,as well as laugh along at his,and the teams,mistakes.Overall,a decent,watchable,if not great,comedy.

Great fun for all soccer fans, Tomlinson is great as the lead character and great enjoyment can be had trying to guess who the players are based on.