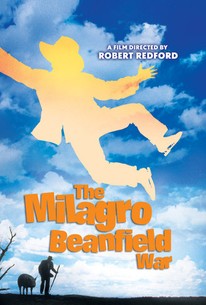 Critics Consensus: Arguably Robert Redford's most inchoate work, The Milagro Beanfield War has plenty of beautiful moments, but they don't quite add up to a worthwhile whole.

Critics Consensus: Arguably Robert Redford's most inchoate work, The Milagro Beanfield War has plenty of beautiful moments, but they don't quite add up to a worthwhile whole.

Critic Consensus: Arguably Robert Redford's most inchoate work, The Milagro Beanfield War has plenty of beautiful moments, but they don't quite add up to a worthwhile whole.

It's advisable to know from the beginning of The Milagro Beanfield War that "milagro" is the Spanish word for "miracle." The scene is a rundown Hispanic community in New Mexico, bordering a posh housing development. In full control of the local water rights, the powers-that-be are secure in the belief that they'll be able to expand their development without resistance from the locals. No one can foresee that impoverished farmer Joe Mondragon (Chick Vennera), during a burst of frustrated rage, will accidentally open a heretofore hidden sluice, thereby providing free water for his bean field. At first, the locals are against Mondragon's "insurrection," reasoning that the new housing development will provide jobs. But with the help of Charlie Bloom (John Heard), a burned-out '60s activist who now runs the community newspaper, Mondragon becomes the hero of the hour, the spiritual leader of an ever-growing "no development" movement. The evil land developers send their minions to intimidate or coerce Mondragon; each time, however, he is seemingly protected from harm by divine intervention. When Mondragon is forced to shoot a trespasser on his land, it looks as though his luck has run out. Chased into the hills by private detective Kyril Montana (Christopher Walken), Mondragon is once more rescued in the nick of time by what appears to be a miracle. And there are more wonders to behold before fade-out time! Whimsical, yes, but thanks to its hand-picked ensemble cast (including Sonia Braga, Rubén Blades, James Gammon, Daniel Stern, Freddy Fender, M. Emmet Walsh, and Melanie Griffith) the film remains totally credible throughout. Adapted by John Nichols and David Ward from Nichols' own novel, The Milagro Beanfield War may be the most likeable "liberal-tract" film of the 1980s. Robert Redford's appropriately Capraesque direction is matched by Dave Grusin's vibrant Oscar-winning musical score.

M. Emmet Walsh
as The Governor

Magazine articles about its making have outlined the problems: multiple script changes, wholesale reshooting. The tinkering appears to have eroded the film's basic core. It is now a series of audience-pleasing turns, with little sense of unity.

Redford and company have put a quirky twist on the material, investing it with a quasi-mystical aspect as well as some raw comedy.

Redford's film sustains a slow mood of simpatico amiability and photographs the landscape with moony or golden washes that are perhaps hard to dislike, but is slain by its adherence to an outdated populist mythology.

The film is very big on sunsets and sunrises. It also has a touristy appreciation for all manner of things folkloric. What it doesn't have is dramatic coherence or backbone.

Corny, you bet. But that's to be admired in an old war horse on the last frontier.

A charming ensemble piece that sprinkles a dash of magical realism over the familiar tale of underdogs rebelling against a corrupt and capitalist system.

"Milagro" captures the inherent naiveté of the liberal '60s sentiment of power to the people. Hilarious and incredibly warm, it's a tribute to a fading culture, leaving one with an ache, knowing soon nobody will be able to hear the wisdom of Coyote Angel.

The Milagro Beanfield War is always entertaining and at times exciting. [Full Review in Spanish]

It is not an unintelligent film; but it is prone to caricature and to queasy decorative touches; the magic is the icing on the cake.

This is probably Redford's most complex and cleverly structured directorial effort.

Pokes gently at the funny bone and is sympathetic without becoming sentimental.

Preachy but well acted. Redford at times is more concentrated on the message rather than allowing the film to put that forward naturally.