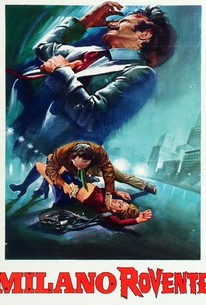 A violent crime thriller from cult filmmaker Umberto Lenzi, Milano Rovente deals with the rivalry between a pair of kingpins in the Milanese prostitution racket. Sadistic gang warfare ensues as nude hookers are beaten with belts and have their faces slashed with stilettos while men are garotted electrocuted and gunned down with their families. Eventually, a truce is called, until one of the gangsters (Antonio Sabato) has his mistress (Marisa Mell) leave him for the other gangster and is betrayed by his own men. Franco Fantasia co-stars in this well-paced melodrama featuring a mournful jazz soundtrack by Carlo Rustichelli.

Gang War in Milan is good enough for a vintage laugh. Though it still feels like a minor exercise in Lenzi's filmography, it's at least an interesting example of the director's work when he was near the height of his powers.

There are no featured audience reviews yet. Click the link below to see what others say about Milano Rovente!