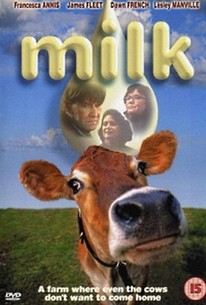 The first feature by Bill Brookfield, Milk is an offbeat British comedy about a family in mourning. The death of an 81-year-old woman sets the scene for this tale about family funerals and the difficulty of burying one's mother. Adrian is an unmarried, unworldly, and unstable dairy farmer dissatisfied with his life. He has had his share of youthful ambitions, but now all he is capable of doing is sloping after dairy cows. Between his filial duty to his bed-ridden cosmopolitan mother Lucy and his obligation to the dairy farm, he has never had a chance in life until his mother suddenly dies. Set in the Wiltshire countryside, the action begins when Adrian discovers her body and ends with its offbeat disposal 48 hours later. His first reaction is to execute his mother's pet parrot and confiscate her precious painting before his extended family swarms the dilapidated farmhouse to pillage her loot. They all want a piece of Lucy and they all have conflicting plans for the funeral. But Adrian intends to surprise them on both counts. The idea that a family member's death brings out the true nature of family dynamics is not a novelty in cinema, but Brookfield dabs the subject with local color, gently poking fun at the quarrels of people whose blood ties do not guarantee similarities of character.

Richard Johnson
as John
View All

Gus Van Sant's intimate, graceful and nostalgic portrait of gay politician Harvey Milk resonates with honesty for the period, the man, and those around him.

There are no featured reviews for Milk at this time.