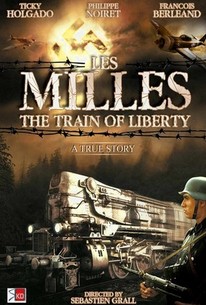 This French WW II action-adventure is based on a fascinating footnote in history. Set just after the Franco-German armistice was signed in June 1940, it chronicles the courage of a compassionate French officer who defied his superiors and, acting alone, redirected a train full of German refugees to a neutral country thereby saving them from execution. Some of these refugees represented Germany and Austria's intellectual and artistic elite and included a Nobel-prize winner, the scientist who invented cortisone, and artist Max Ernst. The French officer was Charles Perrochon, a WWI veteran and military reservist who despite the fact that he had only one lung was suddenly called back to helm Les Milles, one of the camps where the refugees are to be interred. Among those distinguished prisoners is a famous soccer player and this thrills Perrochon, a pragmatic fellow not easily impressed by mere intellectuals. Visiting the camp is a female reporter for the Boston Globe, Mary Jane Cooper. At this point the armistice has not been signed. According to the treaty, these prisoners are to be returned to the Nazis. Knowing the fate that awaits them at home, the refugees send Perrochon a petition imploring him to allow them to save themselves. Perrochon tries to assure them that the French will not allow them to be killed, but deep down he knows the truth. Sure enough, as soon as the treaty is signed, Perrochon learns that his superiors care nothing for the refugees and are only too happy to send them back home to certain death. The refugees are placed upon a train. They do not want to go because they don't realize that Perrochon has taken over a train and paid the crew to take the prisoners safely to Casablanca. It is a dangerous 72-hour trip and the suspense lies in whether or not they reach their destination. ~ Sandra Brennan, Rovi

Philippe Noiret
as The General

Critic Reviews for Les Milles: The Train of Liberty

There are no critic reviews yet for Les Milles: The Train of Liberty. Keep checking Rotten Tomatoes for updates!

There are no featured reviews for Les Milles: The Train of Liberty at this time.