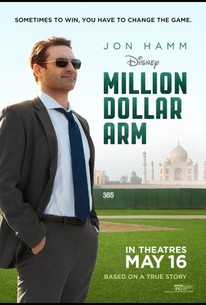 Based on a true story, Disney's "Million Dollar Arm" follows JB Bernstein, a once-successful sports agent who now finds himself edged out by bigger, slicker competitors. He and his partner Aash (Aasif Mandvi) will have to close their business down for good if JB doesn't come up with something fast. Late one night, while watching cricket being played in India on TV, JB comes up with an idea so radical it just might work. Why not go to there and find the next baseball pitching sensation? Setting off for Mumbai with nothing but a gifted but cantankerous scout (Alan Arkin) in tow, JB stages a televised, nationwide competition called "Million Dollar Arm" where 40,000 hopefuls compete before two 18-year-old finalists, Rinku and Dinesh (Suraj Sharma, Madhur Mittal), emerge as winners. JB brings them back to the United States to train with legendary pitching coach Tom House (Bill Paxton). The goal: get the boys signed to a major league team. Not only is the game itself difficult to master, but life in the U.S. with a committed bachelor makes things even more complicated-for all of them. While Rinku and Dinesh learn the finer points of baseball and American culture, they in turn teach JB the true meaning of teamwork and commitment. Ultimately, what began as a purely commercial venture becomes something more and leads JB to find the one thing he was never looking for at all-a family. (c) Walt Disney Pictures

Al Sapienza
as Pete the Scout

Autumn Dial
as Server at Popo's

The pace slackens when the location shifts to LA but the performances and the gentle hand with which the subject is directed keep you interested.

In its own gently comical way, Million Dollar Arm plays up the misunderstandings between Hollywood and India -- as well as the mutual fascination.

A cold, hard business story, reshaped by Disney into a warm, fuzzy hug.

There's nothing wildly unpredictable on offer here, but it still winningly manages to sneak its way past your defences.

A swing and a miss.

The film ... is a paean to the ingenuity of entrepreneurs who scour the globe for human investments that can yield millions.

Clichés aside, there is something appealingly old fashioned about how Million Dollar Arm wears its heart-on-its-sleeve.

The kind of film that reminds you exactly why Disney has built its studio on telling stories that matter and make you feel better about life.

[L]oads the bases with heart, humor and fun and then hits it out of the park for grand slam entertainment.

It may not hit a home run, but Million Dollar Arm definitely does not strike out.

Formulaic is the operative word

A typical feel-good movie that believes that being charming is enough to keep us interested, but it is clichéd, excessively predictable to the point of being annoying and tries to sell us an incredibly corny (and laughable) message that "baseball shouldn't be about business but about fun."

J.B.: How fast do they pitch in cricket?...Fine, bowl. How fast do they bowl in cricket? It is easy to see the main issue with Million Dollar Arm, as it is all over the poster. I like Jon Hamm, I look forward to seeing what he does, once Mad Men ends and he can really delve into some much better film roles, which he is more than able to handle, but his character is not the interesting part of this story adapted from reality. Still, we follow this sports agent in a film that takes the Disney sports movie formula (which has worked many times before) and applies it to this "Jerry Maguire heads to India" story. Unfortunately, while there are commendable elements, the film has little desire to really delve into the more interesting material involving the two kids with the million dollar arms. read the whole review at thecodeiszeek.com

Though charming, inspiring and visually appealing, Million Dollar Arm presents a captivating story with somewhat choppy potholes in its presentation. Jon Hamm is fantastic along with the prospective cast, but it's not enough (even with the Disney charm) to fully hit out of the park. 3/5