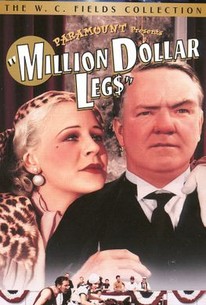 This silly, slapstick fest has a field (or is it "Fields" day?) day satirizing the upcoming 1932 Los Angeles Olympic Summer games. The fun begins when Jack Oakie, playing an American traveling salesman, convinces W.C. Fields, the president of mythical European country Klopstokia, that he could introduce his miniscule nation to the world and make a lot of money to boot, by sending a team to the Games. Unfortunately for the rest of the world, the Klopstokians are by nature the most amazing athletes on the planet.

W.C. Fields
as President of Klopstokia

Andy Clyde
as The Major-Domo

Hugh Herbert
as Secretary of Treasury

Billy Gilbert
as Secretary of the Interior

Vernon Dent
as Secretary of Agriculture

Teddy Hart
as Secretary of War

John Sinclair
as Secretary of Labor

Sam Adams
as Secretary of State

Irving Bacon
as Secretary of the Navy

Syd Saylor
as Starter at the Games

Alan Bridge
as Spies in Cape

Heinie Conklin
as Spies in Cape

One very off-the-wall movie that never for a moment bothers to make a great deal of sense.

It's loaded with sight gags, slapstick and physical humor.

There are no featured audience reviews yet. Click the link below to see what others say about Million Dollar Legs!