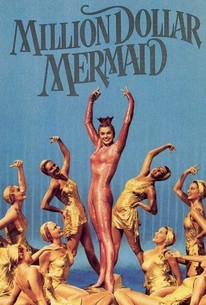 Who else but Esther Williams could star in a romantic drama (with musical numbers) bearing a title like this? In Million Dollar Mermaid, Williams plays Annette Kellerman, a real-life Australian swimming star who took up the sport as a child to strengthen her legs, which were severely weakened by a birth defect. The treatment proves effective, and as she grows to adulthood, Annette shows that she has the talent to be a champion swimmer, though she prefers to follow her dream of becoming a ballet dancer. When Annette's father Frederick (Walter Pidgeon) accepts a position in London teaching music, Annette opts to go with him, and along the way she meets James Sullivan (Victor Mature) and Doc Cronnol (Jesse White), the joint-owners of a boxing kangaroo they intend to exhibit in London. James is already aware of Annette's abilities as a competitive swimmer, and he offers to be her manager and help her earn a living from her aquatic skills. At first Annette isn't interested, but when Frederick's job falls through and she can't find work as a dancer, Annette reluctantly agrees to work with James. He arranges a publicity stunt in which Annette swims 30 miles down the Thames River, which attracts the avid attention of the British press and wins her some work as a dancer. Convinced that the big money is in America, James persuades Annette to travel with him to the U.S., where she creates a scandal in Boston by staging another long swim in a one-piece bathing suit, considered shockingly-revealing at the turn of the Century. The stunt nearly lands Annette in jail, but she escapes the long arm of the law and becomes the star of a water ballet revue. Annette had fallen in love with James, but after an argument, he resigns as her manager and Annette takes up with Alfred Harper (David Brian), the male lead in her show. Annette and Alfred agree to marry while working on a movie together, but James returns on the last day of shooting, determined to win back the heart of the woman he loves. Legendary choreographer Busby Berkeley staged the film's elaborate water-ballet sequences.

Patrick O'Moore
as Master of Ceremonies

Pat O'Moore
as Master of Ceremonies

Rod Rogers
as Marcellino the Clown

Truly one of the most beautiful films of the 1950s, and it's a pleasure to watch Berkeley indulge his more expressionistic tendencies with a full palate of breathtaking color.

If you know [Esther] Williams only from clips in That's Entertainment, see this splashy epic to get an idea of what all the excitement was about.

If you can get past the tedious love story, then you will be rewarded in seeing the absolute best water-ballet routines ever filmed.

There are no featured audience reviews yet. Click the link below to see what others say about Million Dollar Mermaid!