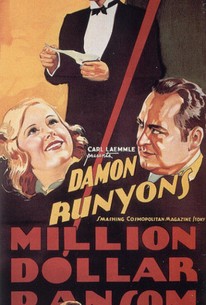 In this romance, a bootlegger finds himself unemployed when he is finally released from prison and discovers that Prohibition is over. The impoverished fellow's luck changes when he encounters a wealthy man who is willing to pay the ex-con to kidnap him in the hopes that the abduction will prevent the wealthy fellow's mother from marrying a gigolo. Meanwhile, a small mob, not knowing the whole affair is a scam, decides to horn in on the action. Along the way, the rich boy falls in love with the bootlegger's daughter causing her father to give himself to the gang so the lovers can escape. ~ Sandra Brennan, Rovi

Spencer Charters
as Pop
View All

Edward Arnold as a reformed gangster chief is good, as usual.

There are no featured reviews for Million Dollar Ransom at this time.