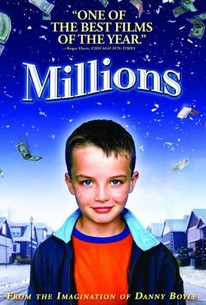 Critics Consensus: A charming children fable even adults can enjoy.

Critics Consensus: A charming children fable even adults can enjoy.

Critic Consensus: A charming children fable even adults can enjoy.

In just seven days' time Britain converts to the Euro. It's the biggest opportunity the criminal world has ever had. When a railway heist goes wrong and an enormous bag of money falls from the sky into the hands of Damian and Anthony, there's only one thing to do--spend it like there's no tomorrow.

Christopher Fulford
as The Poor Man

A subversive fable from one of the UK's most engaging filmmakers, Millions sees director Danny Boyle transform a kiddie movie into a painfully accurate portrait of British consumerism.

Millions offers a deft mixture of reality and fantasy in unexpected places.

There's grief here. And greed. But happiness, humor and hope as well.

A charming cash cow with cute twists to its tale.

To say Millions is a lovely parable would almost do it a disservice, as that suggests that it succeeds more as a moral lesson than as the charming, funny, and touching bit of entertainment that it is.

Danny Boyle's only great film featuring "Who Wants To Be A Millionaire?" is an urbane, thoughtful fable of Lego-bright color, vast imagination and a stout belief in meaningful displays of humanity, charity and altruism without stooping to sermons.

if you're a sucker for adorable, freckle-faced kids, you may not be able to resist the infantile wiles of this movie

A sweet film about struggling with loss, your faith, and family...

A significant part of the film's appeal emanates from Alex Etel's amiable personality that glows through his performance of a boy attempting to live up to his greatest potential.

Sprinkled with a heady dose of magic realism, this film is lovely.

In this dramedy from Danny Boyle, we get the story of young Damian Cunningham- a precocious child who, along with his older brother and recently widowed father, have moved to the suburbs to start over. During the process, Damian comes across a huge stash of cash from a gym bag that literally falls out of the sky. Less concerned with where it came from, and more worried about how to spend it, Damian ultimately decides to try to spend it more altruistically, a task easier said than done considering he's trying to keep it a secret from his dad as well as avoid a mysterious man out to claim the money for himself. Considering this is a kid friendly family film, it might seem odd that it's from Danny Boyle, but it actually fits into his oeuvre quite nicely, especially since it shares the theme of greed with some of his other films. Plus, the idea of someone known for making hard edged film then doing a 180 is not that new, with David Lynch being a great example. I do like this though. Quite a bit actually. It's fun, quirky, whimsical, and very heart warming. Even odd little touches like Damian talking to saints doesn't seem to stick out, and very much feels at home. The film has Boyle's usual flair for energy and drive, and it has some pretty neat artistic touches throughout. The music is quite nice, and I liked how it sometimes reminded me of Danny Elfman's score for Edward Scissorhands. It's also shot and edited pretty well, but that's probably to be expected. You should give this a look. It's a family film that has kids in mind, but it's well meaning, has a great message, and is done very well, so it actually makes sense why it should be recommended.

Yes, it's a children's film, so I'm probably not the best one to judge, but does it have to be this sentimental? 'Millions' is nauseatingly absurd; a Christian tale that had me on the verge of tears by the closing sequence,and not the kind soppy mothers would have. Damian is a precocious little brat who absorbs himself in history books, one day being presented with a large bag of cash that has fallen from a passing train. It is at this moment that the Christian nonsense starts, the virtuous little git giving it away to what he labels 'poor people'. This is all complicated when the dubious owner of the money is revealed, Damian stating that it's 'wrong' to utilise money that's 'not theirs'. It is Damian's good but annoyingly ignorant will that serves as one of my main vexations of the film. There are many sequences that are shot in signature Boyle style; vibrant, fast and technical. I've never much cared for this however, in Boyle's work and in others', it is often excessive and out to impress, and ultimately is often compensating for the film's weaknesses in narrative. This certainly applies to 'Millions'. The film is slushy nonsense, but the aforementioned finale reaches heights I rarely experience; it is so predictable and reprehensibly maudlin. Ultimately, the unoriginal, implausible premise and the horrifying melodrama that follows ultimately make this film a prolonged bore. I cannot understand why a grown adult would want to make a film like this, especially one of Danny Boyle's calibre; then again, he did direct Slumdog Millionaire...

From the bloke who brought you 28 Days Later, that violent zombie classic, Sunshine, that violent space classic, comes another film that is still a classic, but not violent, like most of his other films... Millions is the story about the UK switching to the Euro. Damien is a kid who likes saints amongst other things; when he moves house after him mum died, he builds a cardboard box house by the trains, only for it to be crushed by a bag. A bag full of money that was going to be burnt. What then ensues is a very funny, entertaining and nice story about what he and his brother then decide to do with the money. Lots of funny moments, serious moments, as well as a looming threat and a sinister undertone that soon becomes evident, make this film such a great film for the whole family. Even if you are not into family films, this one is at least worth a shot. It does have some quite serious moments that do come through and capture the child in many of us all...