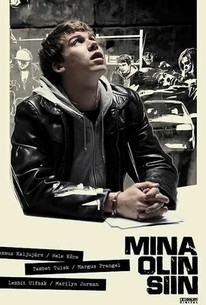 This bittersweet coming-of-age feature constitutes an adaptation of Estonian author Sass Henno's novel I Was Here. First Arrest - a work tremendously popular in its native country. Like its source material, it observes the plight of Rass, a 17-year-old boy from a broken home in the Estonian suburbs. With little to no familial stability, Rass quickly gravitates to juvenile delinquency and begins spending all of his waking hours with a group of young thieves who just happen to deal in narcotics. In lieu of becoming involved with the Estonian authorities (as might be expected), Rass's fate veers on the edge of something worse. The small narcotics amounts that he and his friends are dealing grow by leaps and bounds and draw the undue attention of the Estonian mafia, who grow resentful, then angry, then violent over the fact that a number of their shipments haven't been paid for. Eventually, Rass gains deliverance from the mafia, but at the cost of incarceration. It thus becomes evident that he is telling the entire story in flashback, from the confines of his prison cell. ~ Nathan Southern, Rovi

There are no critic reviews yet for Mina olin siin. Esimene arest (I Was Here). Keep checking Rotten Tomatoes for updates!

There are no featured reviews for Mina olin siin. Esimene arest (I Was Here) at this time.