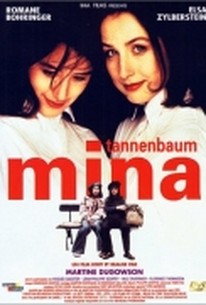 Two women who were best friends since childhood come to realize the toll that adulthood has taken on their understanding of each other in this acclaimed French drama. Mina Tannenbaum (Romane Bohringer) and Ethel Benegui (Elsa Zylberstein) first met when they were ten years old. As young Jewish girls growing up in Paris, both felt like outcasts among their schoolmates, and they began to bond as fellow outsiders. That's about all they have in common. As a child, Ethel was a pudgy extrovert from an upper-middle class family who was eager to make friends, while slender and serious-minded Mina preferred to follow her own path and keep her own counsel, and she was raised under less privileged circumstances. Mina and Ethel have remained close friends as adults, but they are still as different as night and day. Mina, still an intelligent iconoclast, has made a name for herself as an artist, while Ethel happened into a career as a pop culture journalist. Ethel has had a number of unsatisfying relationships with men, while Mina is usually too afraid to approach the men she's attracted to. And while both Ethel and Mina value each other's friendship, in time they begin to realize how little they have in common -- and they provide each other with as much aggravation as comfort. Mina Tannenbaum was the debut feature for writer and director Martine Dugowson; it earned her a Cesar Award nomination (the French Oscar) for "Best First Film." ~ Mark Deming, Rovi

Florence Thomassin
as The cousin

There are no critic reviews yet for Mina Tannenbaum. Keep checking Rotten Tomatoes for updates!

There are no featured reviews for Mina Tannenbaum at this time.