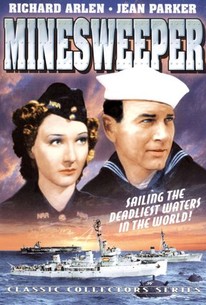 Adhering to the formula of such previous Pine-Thomas productions as Forced Landing, Flying Blind and Torpedo Boat, Minesweeper is the action-packed story of military men under wartime pressure. Richard Arlen plays Jim Smith, a once-reliable Naval officer who has virtually destroyed his life with his chronic gambling. When Pearl Harbor is attacked, Smith finds a chance for redemption. He signs up under an assumed name as a lowly seaman, then proves that he's still made of "the right stuff" by single-handedly seeking out and destroying a new type of Japanese mine. Jean Parker, who like Arlen was a "regular" in the Pine-Thomas product, plays Smith's loyal wife Mary, while the requisite romantic-rival duties are handled by western alumnus Russell Hayden.

Robert Mitchum
as Chuck
View All

There are no critic reviews yet for Minesweeper. Keep checking Rotten Tomatoes for updates!

There are no featured audience reviews yet. Click the link below to see what others say about Minesweeper!