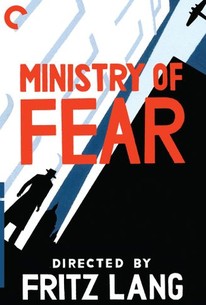 An innocent man is drawn into a web of espionage when he unwittingly comes into possession of a crucial piece of microfilm in this shadowy, ominous film noir. Fritz Lang's adaptation of Graham Greene's novel is filled with unusual touches, beginning with the fact that protagonist Stephen Neale (Ray Milland) has just been released from a mental asylum. To celebrate his return to the real world, he visits a local carnival, only to accidentally receive a "prize" meant for a Nazi agent. When he discovers the error, he turns for help to a detective, whose investigations only make the matter more complicated. Neale soon winds up on the run from both the Nazis and the police, who mistakenly believe him guilty of murder. Lang's famous expressionistic style is somewhat muted here, but Henry Sharp's crisp black-and-white cinematography sets a suitably unsettling mood, and the twists and double-crosses of Greene's story unfold at an appropriately quick pace. While it does not reach the same level of timeless classic as Carol Reed's adaptation of Greene's The Third Man four years later, Ministry of Fear stands as a well-made, thoroughly gripping and intelligent example of film noir.

Anne Curson
as Lady with Children

Edward Fielding
as Executive
View All

Critic Reviews for Ministry of Fear

Lang at his finest and purest.

Fritz Lang, a master at getting the most out of mystery, intrigue and melodrama, in his direction apparently didn't have his way from beginning to end on Ministry of Fear.

This is a wonderfully atmospheric, almost expressionistic thriller, packed with memorable moments.

Plant yourself well in a firm seat and keep your over-coat on when you go to see this thriller, for it dumps you and douses you fast.

While the séance sequence ultimately plays like a slapdash sequence from Clue, it is Lang's artistry that really elevates Ministry of Fear from a meandering espionage noir.

An astonishing combination of clumsy, false adaptation, unsure direction, and mis-casting, has changed Greene's Ministry of Fear into an ordinary spy film, with a few expensive and Hitchcock flourishes.

Uncertainty and fear of the unknown are the hallmarks of this classic film noir by master director Lang, which, until the last revelation, is guaranteed to puzzle and chill the viewer.

Adept at using cinema for art and entertainment since his early career, Lang treats this Graham Greene "entertainment" in modest, yet effective fashion.

This is not Lang's best film of the era, or even his most interesting portrait of paranoia and malevolent forces, but it is a lively thriller with unexpected turns.

The film as a whole doesn't really stick with you, but isolated moments and images do

It's not top-shelf Fritz Lang, nor is it top-level Graham Greene, but as an exercise in World War II intrigue with a smidgen of film noir thrown in, Ministry of Fear gets the job done.

Audience Reviews for Ministry of Fear

I don't really care that the story is ridiculous, Lang directed the film beautifully (Is there any other director who used contrasting shadow and light so well?) and I like that its a WWII propaganda film, that doesn't really feel like a propaganda film . . . probably because the "heroes" and "villains" are less clearly defined than most stuff from that era.

Ministry of Fear is easily one of Fritz Lang's high points of the 1940s. He does a great job capturing WWII London with a dreadful mood. The chase scene in the beginning as well as the seance scene is worth it alone. The cast is good, but the set design is superb and if my senses aren't failing me I'd say that Ministry of Fear is a precursor to North By Northwest. Overall, the setup is good, the middle dwindles a bit and the last few minutes are kind of weak (with a slightly embarrassing ending) but if you can get your hands on a copy of this movie it's worth the time.