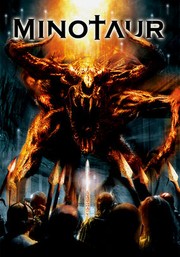 Richard D
June 25, 2017
Well, it would make for an ok TV movie. The Minotaur itself looks cool but the lead characters are dull and unoriginal. It's very straightforward and delivers on the premise.

Only interesting character was the king. A drug addicted leader who keeps changing his mind. The queens is ok but everyone else is bland.

Super Reviewer
Kevin M. W
July 13, 2016
Pretty decent trip down Grecian myth/memory lane as a juvenile Tom Hardy faces off against the biggest angry bull you're likely ever to see. Tony Todd gets to chew major scenery as the bad royal financing the dirty dealings with moustache twirling glee. Rutger Hauer puts in an minor appearance, but it was only to sign a few autographs before leaving to check out the party going on over at Versace's. Sword and sandal fun.

Brian C
½ April 28, 2016
Minotaur is a real mixed bag. First we have the awesome Minotaur itself...it looks horrifying and like a real scary threat. Tom Hardy was awesome (despite the poor source material), and Tony Todd hammed it up as a great antagonist.

But the rest of the acting and logic was atrocious.

The main exit from the Labyrinth into the palace was a simple wood door right in the nest of the Minotaur. What was stopping it from breaking free and going into the palace?

The story of why the one town had to sacrifice 8 youths every three years was good too.

It was a enjoyable fantasy movie, despite its many failings.

Pan C
February 22, 2016
First things first: this movie is very, very, very loosely based on the Greek Minotaur myths. Try not to let that bother you if you plan to enjoy the movie.

Aside from that the movie is not great, the pacing is kind of awkward in places, and the writing is simply not that good. The labyrinth never quite becomes the scary place it's supposed to be. That said, the acting is good enough to still turn bad pages into decent scenes and the monster looks pretty good, despite its original unminotaurian design. The films main problem is probably that it doesn't know what it wants to be. The horror moments bog down the much needed pacing of an action movie, and the cheesy melodrama spoils the building suspense. Even after that it's not really a bad movie. I wouldn't all round recommend it, but it might be fun for fans of monster movies.

bill s
September 19, 2015
No star making potential shown by anything or anybody here.

Super Reviewer
Noname
January 2, 2015
This movie had low budget feeling all the way but i have seen more worse ones so its a watchable flick despite that. Story is about the monster/beast "Minotaur" long time ago in the iron age used for sacrificing stolen youths.. Overall it could have been alot better and i recommend to search for other movies in the same genre first.

Super Reviewer
Martin D
½ March 9, 2014
Long ago in the Iron Age rests a dark shadow over a lonely village. Over generations, the youth from the village taken from their families to be sacrificed to a mythological monster that lives in a grand palace - the Minotaur. Theo, whose fiancée has been sacrificed, is convinced that the monster is not real and that she is still alive as a slave in the palace and drawing up a plan for himself abducted for sacrifice ..

Zulma H
January 24, 2013
My 3 stars go to Tom Hardy. I felt like I was watching and episode of Hercules and even they have better acting and story. The good part is when they killed that lil annoying irish chick. The dialog was kinda like wtf in the sence that it was meant to strike fear but what it really did was confuse you. Some just didnt make sense at all. Its not a complete waste of time cause the grafics are really good and Tom makes it interesting :) oh and did I mention the whole being aroused so youd taste better for the minotaur ?! <--see that a wtf?

Claire T
½ November 30, 2012
I thought this movie was crap and I will not watch this movie ever again, I didn't like this movie, I hated it, it starred Tom Hardy, Tony Todd and Michelle Van Der Water, I don't want this film on DVD

Ajk D
November 7, 2012
Lost connection in the plot against the giant

AD V
½ September 2, 2012
It might be only a notch above a Sci-Fi movie but dammit I like this VERY loose adaption of 'Theseus and the Minotaur'.
It's a monster-on-the-loose film but with a unique setting and an over-the-top performance from genre fav Tony Todd.

Kevin R
½ August 21, 2012
You would pleasure yourself with this filth?

A shepherd has lost his long lost love to be sacrificed to the Minotaur god. When he discovers that his love is still alive and yet to be sacrificed, he travels across the ocean and into the lair of the Minotaur in hopes of finding and slaying the god. Can he accomplish this daunting task and save his girl?

"The world will never forget the shepherd that killed a god."

Jonathan English, director of Nailing Vienna, Ironclad, and the upcoming The Killing House, delivers Minotaur. The storyline for this picture starts okay but is fairly awful. The horror elements are putrid and the acting for the most part is pathetic. The cast is surprisingly talented and includes Tom Hardy, Tony Todd, Michelle Van Der Water, and Rutger Hauer.

"You will find love again."

I had to DVR this film when I discovered it starred Tom Hardy (one of my new favorite actors). He was actually very good in this movie but the remaining cast was below average. The film overall is dreadful; but if you're a fan of a budding star, this film does display that Hardy has been a dynamic actor from the beginning.

Super Reviewer
Remi L
½ August 11, 2012
I knew this movie was gonna suck but DAMN! Not even Tom Hardy's hot could save this crap.

Daniel O
½ June 16, 2012
It might not be the best adaptation but for a straight to dvd film its not all that bad.

Super Reviewer
Emily A
½ June 14, 2012
WHYYYY? Why did this movie have to be so crummy? Why do I keep doing this to myself? It didn't make any damn sense, which would have been okay if its crazy foolishness had been fun to watch. Despite the animation being really rather impressive, the script is really weak and even actors of this calibre can't make it entertaining. Minotaur remains just on this side of enjoyability - neither sincerely good nor ironically hilarious. The actors are all milling around, not knowing what to do with themselves. And then there's Tom Hardy, the gem, buried like a raisin in a cookie, being way better than he needs to be, perhaps under the impression that he's in a real movie. I found it hilarious how much effort makeup and wardrobe had to go to to make him look frumpy. Sorry guys, even with that ridiculous haircut, the stubble and the ratty tunic, I still think he's yummy.

Mark N
May 12, 2012
Bland TV nonsense that squanders some initial creative scenes (probably created in editing afterwards) with an hour of draggy exposition and creatureless scenes. The final few scenes with the monster are decent and the creature looks pretty impressive for the budget but the old rule applies: Creature featured in clear view on the box = sucky movie.

Ian M
March 14, 2012
There were a couple of nice bloody deaths, but seriously... They could do a really good movie about the mythology of the minotaur, and not this steaming pile of crusty vomit. Don't waste your time...
Page 1 of 7